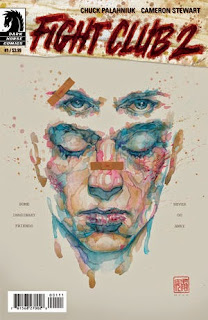 I feel like this story was never meant to continue. As a fan of Chuck Palahniuk and having read most of his novels, I was concerned over the idea of Fight Club 2. I have not had good experiences with sequels in general and not to mention that the original Fight Club book was written in Palahniuk's prime. I mean, have you read any of his recent books? The last ten haven't been great. I think Haunted was the last novel that made me just go... "oh god this is sucks". The thing about Palahniuk for those of you who may not know, is that he likes themes. He likes themes and he likes re-using them. Clings to that one good line you remember from Choke, Lullaby and yes Fight Club, and he uses it over.. and over....and over. This really isn't a bad thing, except well.. have you read 50 Shade of Grey? Let's just say if I heard "oh my inner Goddess" one more time, I was gonna shove her inner Goddess up Chuck Palahniuk's ass for telling people that repetition is great literary device.

Okay all mean things aside, I was a big fan of Chuck's first... let's say five books. I loved Survivors, Choke and Lullaby. I even enjoyed Diary as it was less male centric....had a crazy artist.. I relate to those. I'm also okay with NEVER READING A SEQUEL TO THEM. I really feel like Fight Club was supposed to end where it did in the first book.  That being said, I was willing to give the graphic novel a shot because it is written by Palaniuk himself. Well... after reading issue one, I think I should have just stuck with my original assumption. Sometimes you should just trust your gut. 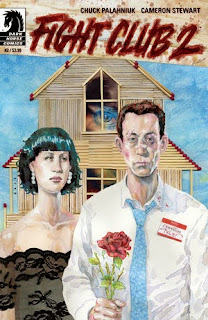 Sadly, I can't go into great detail about why I dislike the issue because I risk spoiling the plot which is against Darkhorse policy for their reviewers. I can say there are specific portions of Marla and Sebastian's life which I think is completely unrealistic for their characters. I could literally write a giant essay on this very thing, once I'm allowed to include spoilers.. you know a little back-up for my bonfire.

In the end, I sort of feel as though Palahniuk is just trying cash in on some past success and that never feels good. It feels forced and the characters don't feel real. The feel re-invented and no one wants Marla Singer to be anyone but who she was in the original book. Don't get me started on the Progeria scene. Seriously, just don't. I hate to say it but most of the population is going to like this book because 95% the population is ready and willing to accept the hype of excellent marketing choices, like the choice to include a sneak peak on Free Comic Book Day. On top of that, who doesn't want to buy a comic when Dave Mack is responsible for the cover? The man is a fucking master and I still think his artwork will live on in historical art books long after we've all been dead and burned (I say burned cause ewe buried sounds awful). Now if only they could convince the man to do the entire comic...
Posted by The Frog Queen at 3:51 AM