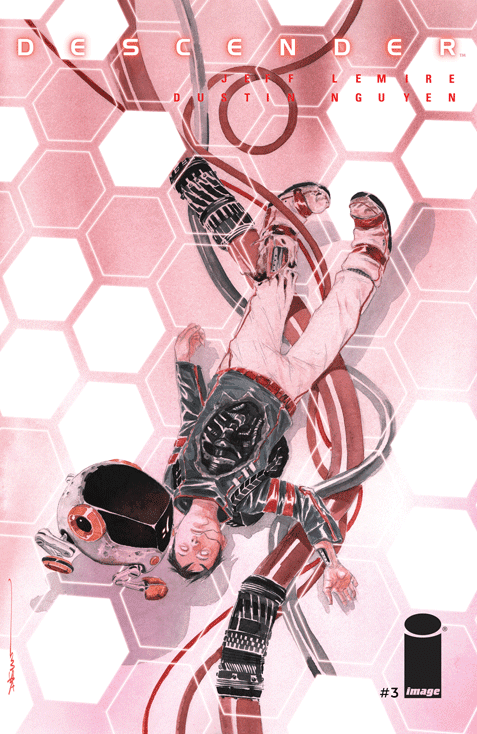 This five part mini-series is sweeping through story quickly. It’s nice to have an overview to remind you what you read last month. Luckily for us, Jeff Lemire understands this and begins the issue with a breakdown of the story to date. He includes a well crafted overview of the universe in which it takes place. Honestly, I needed that because I didn’t have a perfect sense of what this universe was actually like. The issue includes an atlas of the planets that make up the Core Planets of the United Galactic Council. Personally, my bleak outlook on humanity doesn’t include a united anything, but lets pretend for the stories sake, that humanity is actually capable of working together with other species rather than farming them for resources.

The issue makes a little more use of a character who’s appearance until now was rather minor. The robot Driller might actually be my favorite character as he has his own robot terms like “spark off” for system failure and his nickname for humans- humes… which actually sounds borderline naughty, needless to say made me laugh quite a bit.

The story arc is entitled “Tin Stars” which to me implies that the the comic will continue on and not exist simply as a five part mini. For me, this is very exciting. As this world unfolds within the story, I see infinite potential for mining plot with in it.

SIDE NOTE: You can also find this review and more at WeTheNerdy.com !
Posted by The Frog Queen at 3:57 AM