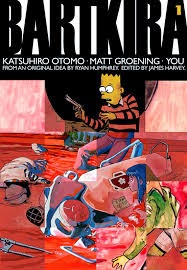 A little while back I interviewed James Harvey about the release of Masterplasty by Image Comics. A gritty one-off about a new surgery, the master of all plastic surgery that could make your most beautiful. This artist and story teller has been working on another project this whole time. A project you may or may not have seen in your local comic shop. Bartkira is a collaborative project retelling the Akira, page for page with Simpson characters.. but don't let me explain it, let's ask the man responsible for spearheading this project.


TFQ: A lot of us are familiar with the on-going project but for those of us who are less familiar, can you tell me how this all began?

James: Bartkira is a long form-experiment where myself and thousands of collaborators from all over the world have taken Katsuhiro Otomo’s Akira and replaced the characters with characters from The Simpsons. Bart is Kaneda and Tetsuo is Milhouse. We’re about 75% of the way through redoing the entire 2146-page comic series, and we’re just putting the finishing touches on our take on the movie trailer. We’ve had about four gallery shows in America and the UK, and our first exhibition in Tokyo is about to happen starting this weekend. 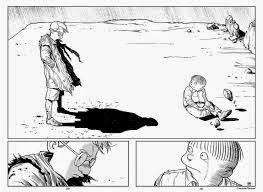 It started when the fine artist Ryan Humphrey redrew a couple of scenes in Akira with Simpsons characters- fittingly, the first was the scene in volume 3 where Akira’s powers finally awaken. I got incredibly excited about this and asked Ryan if I could spin this off into a group project and he said yes.

It’s way bigger than I could ever have hoped for it to be, and I can’t believe it still has this much momentum well into its second year. Katsuhiro Otomo’s Akira is such a rich feast of ideas and it’s been wonderful getting to interface with it in such a prolonged and intimate way.

TFQ: This is the third installment of Bartkira, can you tell me a bit about the talent we will see in this volume?

James: Yeah! We’ve got pages by Cameron Stewart, the Eisner Award-winning artist/writer behind the recent Batgirl reboot for DC. We’ve also got Nick Sumida, who put out a brilliant collection of comics called Snackies last year. He’s one of the funniest cartoonists working today and it’s great to have him in the book, if only for a short cameo. 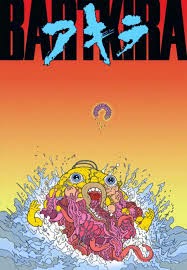 The cover is this awesome collage that features the work of about 6 different artists- including UK artist CROM, and Lily Bernard, the creator of Nickelodeon’s Puffin Rock, who made her contribution out of plasticine. It also incorporates work by Blair T. Kerr, an artist out of the Bronx who works in this abrasive, chaotic style that looks the way 80’s Public Enemy sounds. His work was a big inspiration on how the rest of the cover came out.

The back cover is a photograph of a mind-boggling cake made by Kylie Mangles, which depicts Ralph Wiggum in cross-section- his skeleton and innards clearly visible. She made it for her own purposes but she let us use it on the back cover. It’s kind of perfect.

There’s so much incredible work on the interior. Just glancing through, some pieces that stick out are by Jacob Chabot, K. Thor Jenson (who I’ve been a fan of since I was about 15, so it was good to get him in), Tyler Landry, Stephen Morrow. Me and Ryan are in there, too, with Ryan reprising the sequence that kicked the whole thing off.

TFQ: Each volume of Bartkira showcases a range of talent from the graphic novel community, how do you go about choosing contributors? 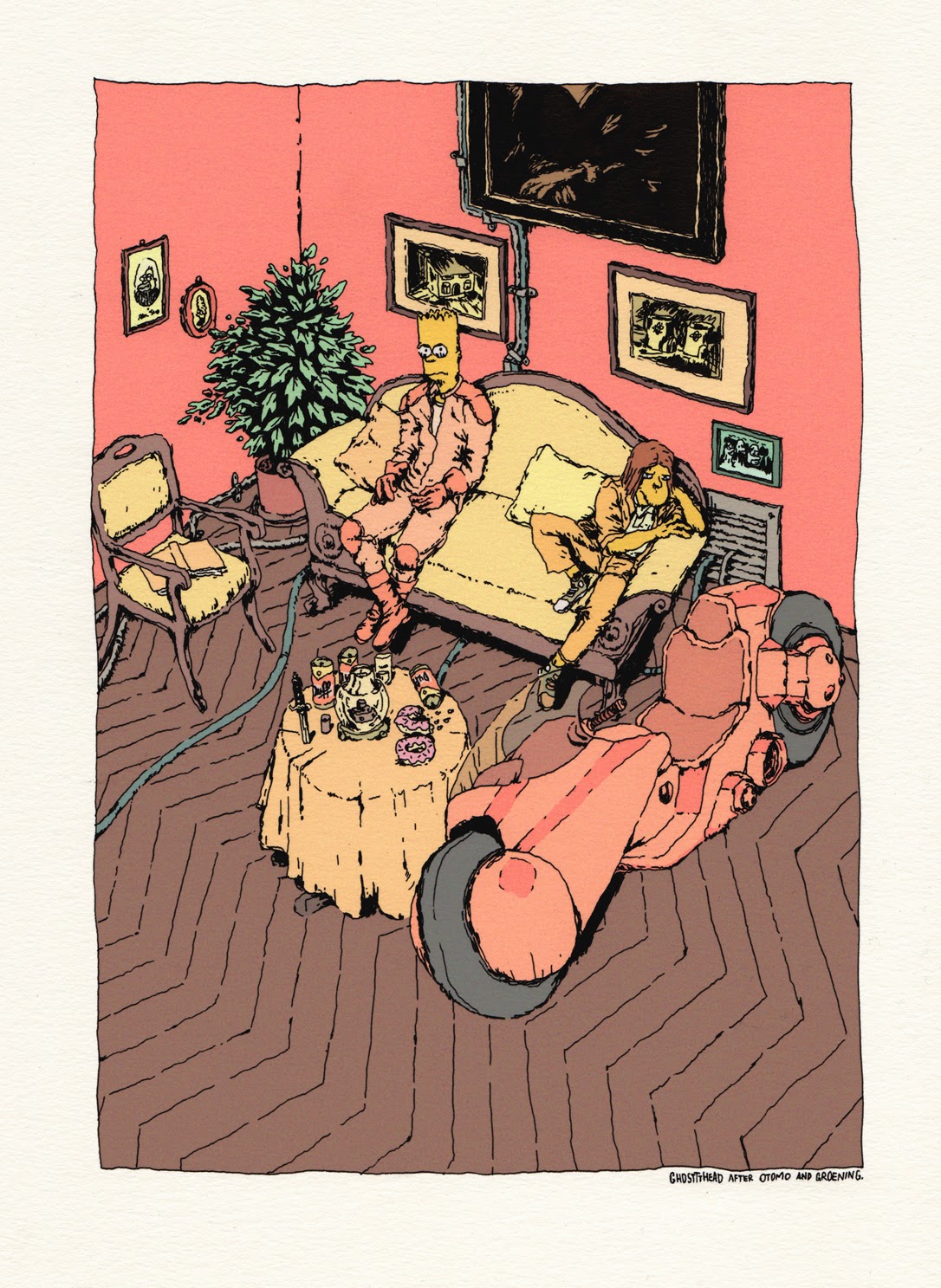 James: I have a mission to get Ryan Humphrey to have at least five pages per volume, but besides that I don’t have much criteria for choosing collaborators. So long as you can hold a pencil, you can do it. Actually, one entry to one of my projects in 2009 was done by a homeless guy drawing using the mouse in his local library. I think this thing gets its power from the range of different types of approaches and levels of skill. I’d love to see more people work with sculpture or collage or puppets and so on. The spaces fill up really fast, though.

Kate Sullivan, who organised the animated trailer, had a totally different set of criteria for her project- it was like, "don’t bother applying unless you’re amazing and you can make this look EXACTLY like The Simpsons.” I really can’t wait to see how it turns out.

TFQ: What are some of your personal favorite contributions to Bartkira?

James: Without a doubt, Cameron Stewart’s contribution in this volume we’re about to drop is one of the all-time greats- it's really a perfect example of what I hoped this thing would be. It’s like fine art. I also love all the work I got the mysterious dumpcomics.com to do for it. Such a rich style that guy has! If it’s a guy. WHO IS DUMP COMICS 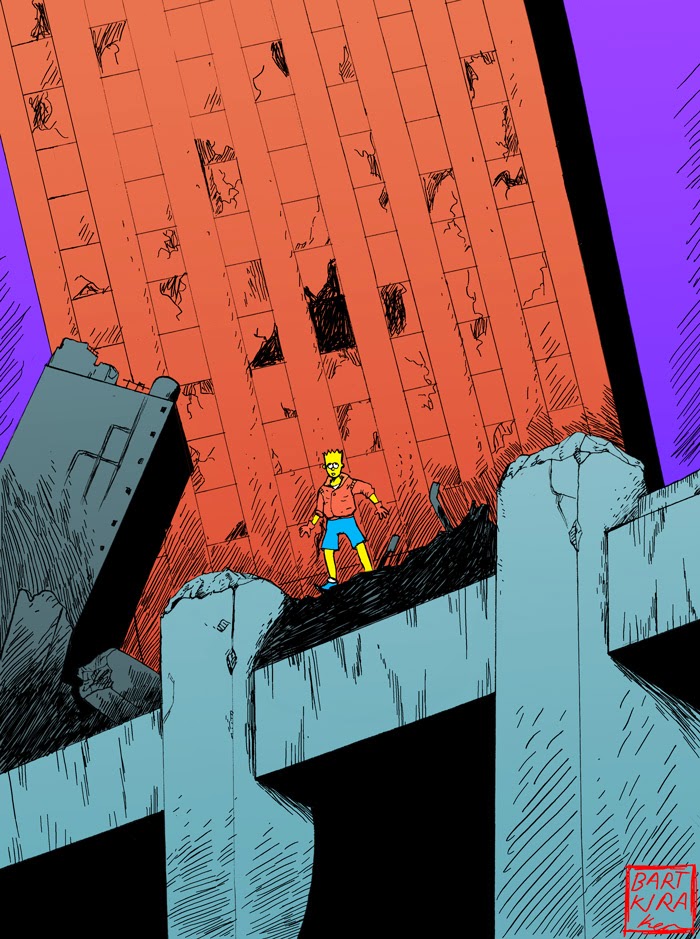 Natali Koromoto was one artist who I reached out to specifically- I have her wicked Simpsons postcards on my wall and it would have been a mad oversight not to have her in there.

Sarah Burgess is one of my favorite UK cartoonists and she did some really awesome work in Volume 2, which ended up not getting used due to an editing SNAFU where two people got assigned the same pages. It’s on the blog, though, if you want to look for it.

Kristina Collantes is a genius artist who I was lucky enough to get for volume 6. Her BF Tom Neely did great work in volume 6, too. They both worked on THE HUMANS for Image. Kristina inks stuff for me sometimes, too. I feel really lucky that I get to collaborate with Kristina because we’re kind of each other’s biggest fans.

Frans Boukas did a lot of work for us, too. He’s like a punk version Geof Darrow. His style is so intricate! Again, I feel incredibly lucky that he chose to get as involved as he did. Not only did he produce a ton of amazing artwork for volume 6, he also brilliantly edited the Bartkira zine that Floating World Comics put out (all proceeds go to Save The Children).

Frans brought Simone Nemes on board who did a lot of really wonderful work for us, too. But! I’m forgetting like a thousand people here.

TFQ: How can people get their hands on Bartkira, if it's not readily available at their local comic book retailer?

James: The zine that Franz edited is still available from Floating World’s website. It encompasses work from all 6 volumes, so it’s still the definitive Bartkira-in-print article. There was also a very limited edition zine that myself and Hannah Chapman (Comic Book Slumber Party) put together to coincide with the volume 2 launch, but good luck getting hold of that.

Besides that, you can read everything we’ve finished so far at Bartkira.com. Go!
Posted by The Frog Queen at 4:30 AM