Exclusive Interview with Jimmie Robinson on The Empty

Image has published a new series that feels vastly different from anything that is currently being pushed out from the title. The Empty is a science fiction epic centered around a uniquely evolved character Tanoor, who lives through desolation. Her village if found struggling to live as the last clan of humans when they meet a stranger with a power which carries with it, the hope of survival. I was really lucky to get an advanced read of the first two issues and ask a few questions about this curious story. Writer and illustrator Jimmie Robinson has cultivated a world unlike that you have seen before. New species and new languages are waiting to be discovered in The Empty. I got to ask Jimmie some questions about his book. Check it out:

TFQ: Can you give me some background on the conception of this series? 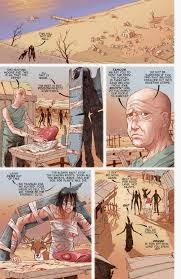 Jimmie Robinson: The Empty started out way back in the 1990s when I did a story called “Lila’s Garden”. The concept was basically the same, but set up on a classic sword & sorcery platform. Lila was the magic gardener from her village with an enchanted watering can that could help anything grow. Lila would grow things depending on the situation, and the things she produced had magical elements -- such as, giving someone health, make someone tell the truth, finding clues to a mystery and all that jazz. But in 2013 I decided to dust off the story and give it a new spin. I didn't want to pull a simple medieval fantasy story. Rat Queens, Skull Kickers and others were already doing that. So I spun it another direction. That’s how it came about in this version.

As for the actual original conception, back in the 1990s I drew a quirky ball point pen sketch of a girl holding a flower and a watering can. At the time I also wanted to do something different than the typical super hero action stuff. Lila’s Garden was published as an 8-page story in the anthology called Mythography, which was published by Michael Cohen, the creator of Strange Attractors.

TFQ: How did you begin to develop the world these species live in and what inspired their appearance?

Jimmie: Well, with a series called “The Empty” it wasn't easy. I was tempted to make all the landscapes a straight line on the horizon. Originally I was thinking of this on a high-concept level, like a far flung European style comic with a minimalist slant and all that. However, while that sounds a nice break from the norm it also looks horrible on paper. So I settled for a world that was barren enough to look uninhabitable, but not completely devoid of life. You see a few bugs, you see a few withering plants, some skeletal trees, stuff like that.

My next step was to define the type of creatures that could survive in such an environment. Often I’d see a fantasy or sci-fi monster movie and the beast is 100% carnivorous. However, their planet looks barren of the type of prey that would support such alien creatures. It boggles the mind. So I stepped somewhere in the middle. I went with plant eaters and some carnivorous animals, but not so much that it’s like a wild safari. In fact, the horizon is still somewhat flat and rocky. No large herds of roaming beasts.

In the beginning of the story we are introduced to completely different characters from different worlds. One comes a literal paradise, her name is Lila. The other comes from The Empty, a barren wasteland, her name is Tanoor. When these two get together all sorts of problems come up. Those problems lead us to an adventure across the land to unique species and environments.

TFQ: What inspired you to write a story with this unique attention to evolution? 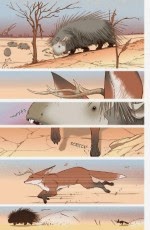 Jimmie: Often a story takes a small view of history. Most adventures develop over a short period of time. Mostly within the span of a single lifetime. Maybe two lifetimes. Maybe there’s a generational aspect of handing the torch from one hero to another. Stuff like that. However, I wanted a story that took an evolutionary twist. Not just concerning the characters, but society and the environment, as well. I’m talking like the development of the Grand Canyon, the rise and fall of civilizations, the death of languages and cultures, and the isolation of certain communities. I didn't want to push a certain didactic agenda, I just wanted to broaden the scope of my story and give it a long range twist.

Today we live with several factors that evolved from history. How we talk. The language we use. Latin. Foreign language. Customs. Wars. Borders. Politics. However, unlike other times in history the things we do today might have very dramatic and scientific ramifications on the future. The Empty skirts around that issue in a number of ways — but at the same time I just want to tell a classic buddy adventure travel story.

TFQ: Why is it that you choose to portray the tribe's xenophobia through the elder of the clan?

Jimmie: As with most generations, it’s the youth that venture out and away from hard-pressed customs and fear of the unknown. We can see the needle move more nowadays in our interconnected world. Things are changing and often it’s the youth rising up against the old guard that is makes it happen. It’s a simple and well-used platform, and mostly just used as what Joseph Campbell would label as “the call to adventure”. A conflict is created, characters draw lines in the sand, and a new path is laid out. In this case, the elder who controls a small village in The Empty, fears losing control to a new stranger with strange powers and abilities.

In this case, the Elder isn't really a bad person. He’s just doing what he thinks is right for the people based on his experience. However, the warrior character (Tanoor) has traveled the land. She has seen a lot of the world and she has less fear of the unknown. She’s an adventurer. It’s natural for her to explore new paths.

TFQ: What can we expect from The Empty? 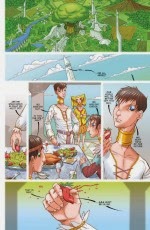 Jimmie: Major twists. And I’m not using the word lightly. If you think you got The Empty figured out you’d be wrong. I’m setting the groundwork for a huge story structure. We start with an immediate problem, but that leads to the core problem and even that branches into a world encompassing situation. This isn't a story where the characters merely beat the bad guys, this is a story where everyone discovers the puzzle pieces, then figure how it all fits together only then to realize the true problem right beneath their feet. I’d like to think of The Empty in the classic larger-than-life sic-fi stories we used to see in the 60's and 70's.

Granted, I admit I’m trying to pull this off in a mere 6 issue mini-series. However, though I will hit a natural end of this story arc, I am hoping to return to the series with the rest of the bigger picture and future developments and characters. I tend to work in a *series of mini-series*. So if something works for the reader I can come back to it year after year. I did that with Bomb Queen and Five Weapons, both from Image Comics. It’s a good production platform — especially since I am doing ALL the work this time around.

GET YOUR COPY OF THE EMPTY TODAY!
Posted by The Frog Queen at 4:39 AM