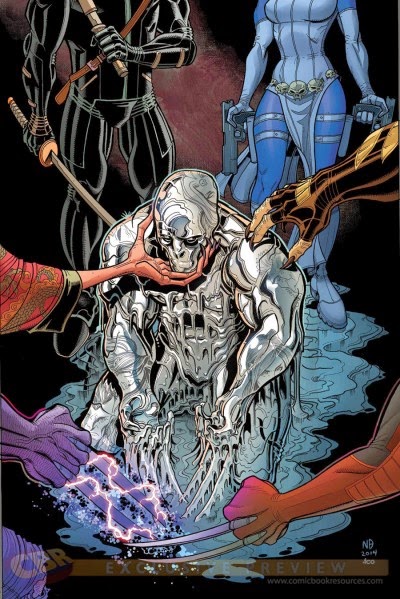 I appear to be making good to keep up with the Death of Wolverine aftermath. Although I can't say I enjoyed all of The Logan Legacy, there were some goodies out of the seven issues. As a result I grabbed Wolverines #1 (mostly because it's illustrated by Nick Bradshaw).

This story picks up where that one left us. The experimented mutants from the Weapon X program are dying slowly and have grabbed Daken, Mystique, X-23, Lady Deathstrike and Sabertooth to help them recover a cure abandoned Weapon X facility.

To be sure, you really don't NEED to have read Weapon X Program or The Logan Legacy in order to understand the story in Wolverines. It's fairly straight forward and Charles Soule always includes a lovely synopsis of the story on the inside cover anyway. I actually crapped out on the Weapon X Program mini series. I read the first two and then dropped off. I suspect they made it out of the facility, realized they're all dying and well, that kinda leads into The Logan Legacy. Ta da!

As firsts go, it's not bad. Soule throws in a few jokes at the expense of some of the characters and Nick Bradshaw is his usual awesome self. I really love the cover with the adamantium covered Wolverine surrounded by his "legacy". It's the ending of this issue that is the real kicker! In the end someone shows up to take Daken's right arm and eye. Apparently he plans to "put it to better use". Guess who it is?!?