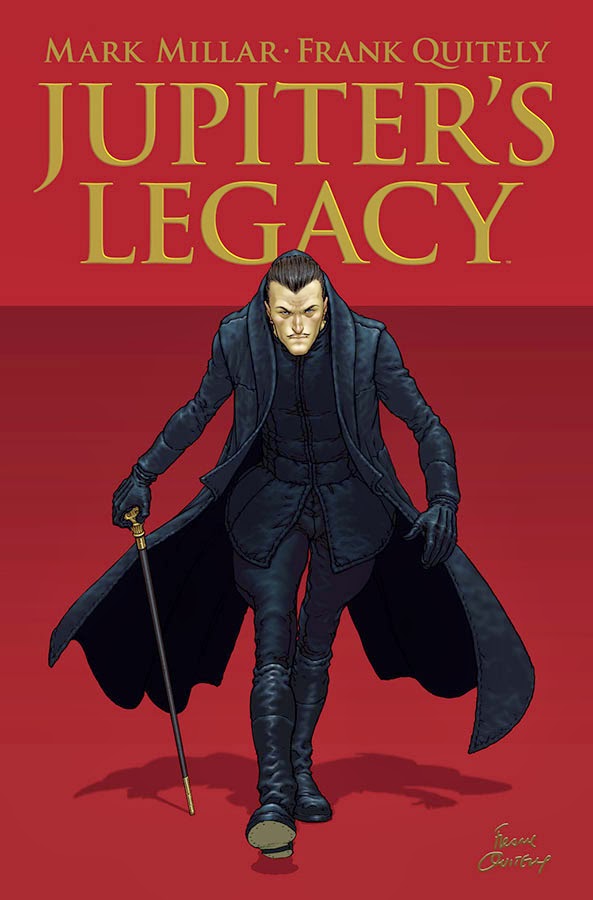 It's a brand new year and what better way to kick it off than an interview with Mark Millar! I was lucky to be able to read the exciting conclusion of the first story arc in Jupiter's Legacy. There is so much going on in this series that my mind kind of exploded out of the top of my skull. Uncle Walter reminded me of so many people I know personally who claim to have a left wing agenda which will right the world. In reality their ideas are so extreme they've basically lost all the ideals of equality and ended up being a tyrannical dictatorship. Of course, the people I know don't have super powers that they can usurp a government with. Uncle Walter became my favorite character and his thoughts blew my mind because they echo what so many people casually state about how we could fix the world.

Jupiter's Legacy is more than your average action comic. It addresses a generational conflict between parents and offspring while tackling difficult issues within modern economics and politics. There are some important jabs at celebrity and fortune making this my favorite Millarworld series to date. It only elevates the series infamy to have Frank Quitely as illustrator. His work is breathtaking and I find myself clapping after finishing each issue.

The long awaited conclusion to the first story arc is available when issue five hits the shelves January 14th! There will be two variant covers available by Bryan Hitch and Duncan Fegredo. So as a bit of hype up to issue five, I wanted to talk to Mark about the story and remind you all why you so badly need to read issue five!

Mark: It's actually very interesting you see him as leftist because a lot of readers assumed he's a right-wing political ideologue. The truth is that he's something of a combination, like most of us, and essentially an intelligent man trying to run America in the way he imagines is best for all three hundred million people. What the story is about, or one of the main themes, is the fundamental brilliance of democracy as an idea. Yes, there's a lot of stupid people in every country just as there's a lot of intelligent people, but nobody really has a majority on wisdom and one of the reasons a democratic society very broadly works is because the crowd is respected. Democracy is the sum of all parts and we explore this a little in the second volume where one of the characters is talking about the wisdom of crowds. Have you heard of this? It's the fascinating fact that at a county fair in England 100 years ago an experiment was done where the weight of a bull was estimated by 100 regular people and that average weight was more accurate than the estimates of the butchers, farmers and animal doctors who placed a guess too. It's the best argument for democracy out there and why, as a society, we tend to be more stable than an autocracy. Walter shares a lot of views both myself and I would imagine the majority of the readers would share. But it doesn't work because he's running a society through the prism of an individual. Jupiter's Legacy is a love letter to the foundations of America, whether it's old school superheroes or the very building blocks of a constitution that had noble intentions. Walter has forgotten what he was here for and that's why it's all coming apart for him.

Mark: To some extent, though that's been done a lot, even in superhero comics for a number of years. I'm actually going a step beyond that and showing the bored, depressed children of these amazing heroes at the opening of the story, but then quickly throwing them into a terrible situation and watching them climb out of it. The series comments on celebrity in the sense that pretty much no celebrities I know are happy. Like the characters in the story, they have more money and privilege than they ever needed and now ultimately realize it's empty. The book is about what they do next and volume one explores that re-embrace of heroism. It's about realizing that those parents they were reacting against actually had the best of intentions. It's about growing up.

TFQ: With many of your books that focus on characters with super strengths or abilities that set them apart from the average man, there is the great power struggle between good and evil. Many of your the villains of your story are not purely evil. Can you explain a little about why this is!?

Mark: A book is only as good as the bad guy. It's why the Batman movies starring The Joker are the only ones that really go through the roof. But the bad guy needs a level of intelligence and empathy to be great. Walter, I think, is a really good bad guy because his reasoning is sound. He's watching the world go off a cliff and he's trying to save it, breaking the superhero code they all established in the thirties. We get him. Likewise, Brandon feels inhibited by his wonderful father and the only way he thinks he'll ever measure up is by replacing him. The son murdering the father is a powerful moment. It goes against society and it goes against nature so it's especially jarring in a superhero book. But again we see why he did it. We could have done it in issue one, but by issue 3 we felt it more.

TFQ: The entire book is just beautiful. What is like to work with Frank Quitely?

Mark: He's slow, but he's brilliant. It's like Stanley Kubrick. You wait years, literally years, but the final product is so perfect that you forget all the tears and just feel massively proud that he's making something that looked good in your head into something so beautiful you'd hang every page on your wall. The guy's a genius. One of the three greatest artists the comic-book industry has ever known. If he was out there every month perhaps our senses couldn't take it. It would be too much joy. As is, we're running the sister title April through to August and then Frank's back with volume 2 a month or two after, the final five issues stockpiled.