The stories of Wasted Lands focuses during an era of post-industrialization where greed dominates and ordinary people must rise above chaos. I was lucky to have a chance to ask Dorman some questions about how the book came about and his intentions with the series. Check out our conversation below!

TFQ: The Omnibus includes a lot of info about your process. What initially got this story going for you? What were your original intentions?

Dave: The OMNIBUS itself is a collection of material and stories based on my WASTED LANDS universe. The original intent was to repackage the first graphic novel, RAIL: BROKEN THINGS with additional material recolored, re-lettered and updated in director's cut fashion. Mike Kennedy at Magnetic Press and I have known each other both personally and professionally for 20+ years. Mike was familiar with the additional materials I had created for the WASTED LANDS in short graphic stories and text stories. He suggested that we combine the previous materials material, the new materials, and the RAIL: BROKEN THINGS graphic novel to give the reader a more comprehensive look at the WASTED LANDS universe. Mike's encouragement is the genesis of how the WASTED LANDS OMNIBUS came to be put together.

TFQ: What is it like working on your own story as opposed to someone elses? Is it more challenge to designing the entire story yourself or do you feel the freedom is more positive?

Dave: Definitely the freedom is much more creatively positive. I don't have to worry about outside editors and creative people adding, deleting, or trying to impose their ideas onto my characters and stories. While working with other companies and creators--especially licensed products such as STAR WARS and ALIENS--is very rewarding, being able to to create my own characters and universe out of nothing is substantially more creatively rewarding.

Design-wise, it's much more challenging because I have to create my whole world from nothing, whereas, when I do product illustrations like STAR WARS, their universe is already created, and there's not quite as much legwork to do in creating an image for that.

TFQ: In this story, women have roles of power and responsibility despite the world being this harsh place. Often in stories like this, women's roles are cast as concubines and prostitutes. How did you begin to define women's roles in the Wasted Lands?

Dave: From my mother to my sister Nancy to my wife Denise, and my women friends, I've always been surrounded by strong, empowered women. I think that influence naturally seeps into my storytelling. Originally, the story had many more male protagonists and fewer female protagonists, but as I began plotting the outlines for the various graphic novels and stories, it was just a natural progression for me to add stronger female characters.

I felt that my women protagonist and antagonist characters gave a better balance to the storytelling, as well as providing more diversity for my readership. I wanted my female readers to have characters that they could identify with, and I believe it makes the story all the more realistic. I'm not writing a men's pulp adventure with the bare-chested male hero fighting his way out of the jungles of South America. This is a cohesive world view. Half of the populace of WASTED LANDS is female, just like in our world. Having a male-driven single protagonist was never really a thought beyond the creation of EDGE, the original character, and as soon as I created EDGE, I created his counterpart in SKID, the female protagonist.

TFQ: What was the significance of the roles given to them, like M. d'Cease for instance? 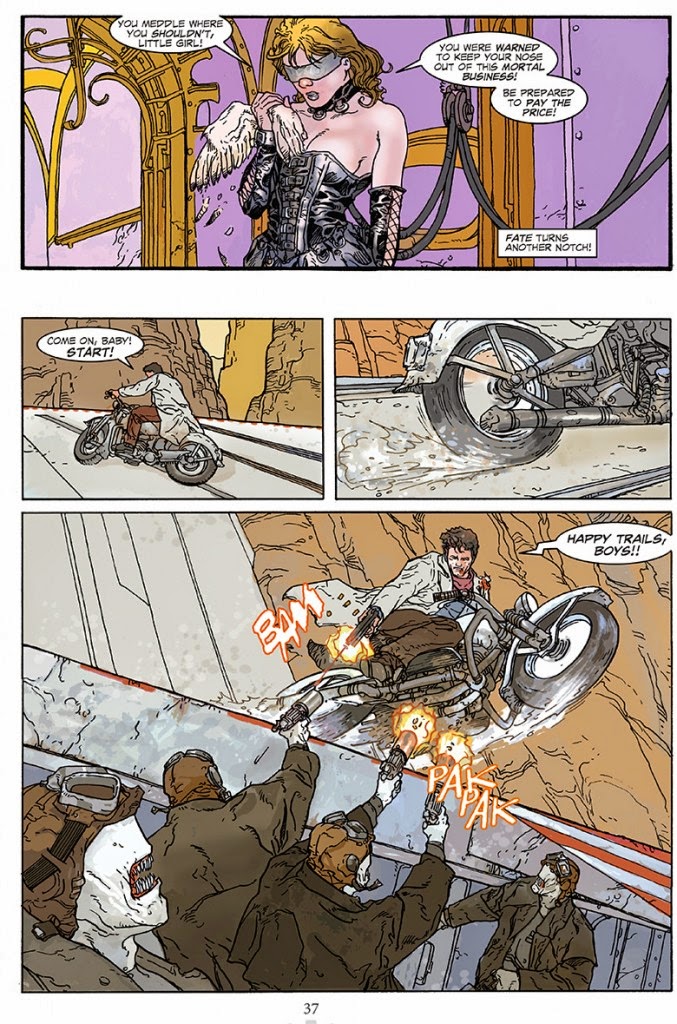 Dave: The only significance in appointing any particular character to a particular role is in how they affect the way the story is driven and how they help to advance the story. In working up the basic plot lines for the graphic novels and the stories, the characters needed to be created to tell those stories. However, once a character is created, like in real life, it takes on a life of its own. You don't know what direction that character will go in until the story is told. The decision to make the character male or female, for me, is a role of the dice. My thinking is that if I make this character a male, how does it affect the role that he's taken? How does he relate to the other characters within the story? The same is true for the female character. It's not just a flip of the coin deciding who's male and who's female.

TFQ: What does the future hold for the Wasted Lands? Do you see more graphic stories coming out of this world again?

Dave: Right now the plan is to complete a five graphic novel cycle, which began with RAIL: BROKEN THINGS in the first OMNIBUS. I hope to create one graphic novel a year until that cycle is finished. Additionally, we plan on producing more text stories, both in short format and in novel-length books that should be available in hard copy and digitally, as well as working on individual comic stories for mini series featuring some of the main characters, such as Iguana and M. d'Cease. We also have plans for a board game we're developing and have successfully game tested at GenCon called IRON WARS, based on historical elements from the WASTED LANDS. Our new card game, RED TIDE, is based on the surf culture of Mortal City.

Dave Dorman's Wasted Lands Omnibus is Available Now!
Posted by The Frog Queen at 3:39 AM