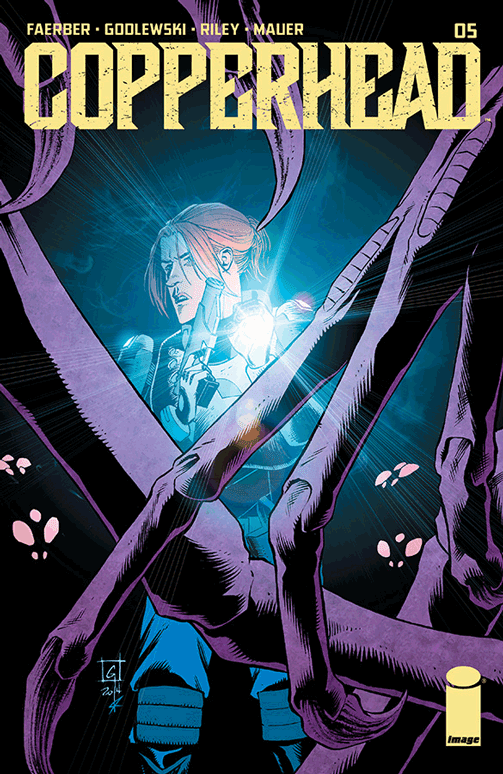 Can I just say that I love Boo? I love him. If he were real I'd want a bunch of hugs. SOOO MANY HUGS! Okay well let me get down to the serious business. So Copperhead takes place on a planet colonized by multiple other species. The actual natural inhabitants of the planet are called  "the natives". They are insect-like aliens, think praying mantis.

I was a little perturbed by the direction the story took in the issue. It's the implications that the natives stoop to violence when your chips are down..literally. There are some statements against them, some claims of violence and gambling. There's also some business about a treaty. Does any of this sound familiar? Sigh. It hurts me when these sort of stereotypes make it into modern fiction. I like to think that perhaps things have changed and we no longer associate native with vice. I'd also like to think that this is just a coincidence and not inspired by any old fashioned opinions of people here in North America. I'd be a little naive to think so however. I grew up living close to a reserve, had friends on the reserve and heard lots of shitty, bigoted opinions made against the people who lived there. I take things a littler personally when they paint native Americans & Canadians in a shitty light.

Yet before I start waving my hands in the air and shaking my finger at the author, I need to consider that there were moments in the book leading up to now, where judgement was passed on characters because of their race and social standing. These situations were rectified and later people realized that they were unfairly judging others due to social stigma.

So although I do not like what is implied in this issue about these fictional natives (although come on?!?)  I have faith that the story sees to rectify situations of racial stereotyping within itself like it has with other characters in the issue. So before you go yelling at me for loving Copperhead and wondering how I could let all that pass... there it is.
Posted by The Frog Queen at 3:57 AM