The Borgias by Jodorowsky & Manara 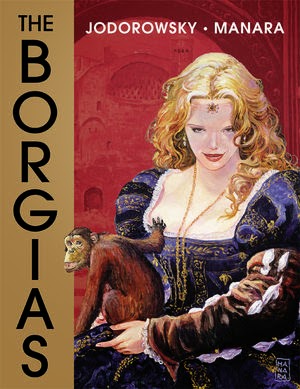 Conspired and conceived by industry giants Alejandro Jodorowsky and Milo Manara, The Borgias is now collected for the first time in a beautiful hard cover edition put out by Darkhorse. Italian film maker Jodorowsky is no stranger to graphic novels although you may know him best for his work with French artist Moebius on their prolific science fiction series The Incal.

Although Jodorowsky's work is often brought to the English speaking world by Humanoids, Manara's work is always released by Darkhorse in these tremendous collected editions. Although on a personal note, I have to state that I much prefer the book binding produced by Humanoids. They have printed hard covers rather than slip covers over blank books. However, in Manara's case the slip cover does come in handy if for instance, you are worried about displaying the titles of Manara's many erotic collections in your library, You can simply remove the slip cover and fool everyone with a wordless and image-less binding. I however proudly display my Manara collection despite what's on the cover or spine. One other upside to the Darkhorse binding is that the hardcover is deceptively light. It's easily held up in bed as you recline and read above your head. Something I'm quite fond of and a task not so easily repeated with the Humanoids books.

Enough about packaging, I want to talk about this beautiful edition. Darkhorse lovingly included a bio on each of the creators as well as a mini history lesson of the Borgias. For those who may not know, the Borgias were a family back in the 1400's who's patriarch rose to status of Pope by bribery. The story focus begins on Rodrigo Lanzol Borgia's ascension as Pope Alexander VI and on his family. The story tells of political corruption, incest, murder and more. Basically everything that makes history horrible and yet terribly interesting. It's no wonder that the historic tale has become so popular in film and on television. It's since been turned into a TV series running on it's fourth season. I haven't watched it.. I'd much rather read this book.

Due to content of course this book is not for children. You may also find yourself put off by some of the explicit sexual content. In case you were not aware, as aforementioned, Manara is most famous for his erotic graphic novels. So you know, try not to shrink up your nose and go on some tangent about degradation. Please remember as well that homosexuality was not exactly accepted in Rome, although of course, regularly practiced. You may feel pretty disgusted by some of the characters reactions. It's a story, not a hate crime people. I've noticed that many of our less educated social justice warriors have been rallying around the banning of books with homophobic acts and violence in them. To me, that's just as stupid as banning To Kill A Mocking Bird. I just don't think it's right. We need to see this stuff to realize how far we have come and just how far we have yet to go since much of this shit still happens today! Now that's an eye opener.

Anyway, this book is way up on my favorite list because a) brilliant retelling and b) beautiful all the way through. Manara is such an amazing artist and I've been a fan of all his work. This one entirely in full color where much of his erotica is in black ink. You won't be disappointed with this one. I promise you it's well worth the price tag.

by Italian film maker Alejandro Jodorowsky and I
Posted by The Frog Queen at 4:27 AM