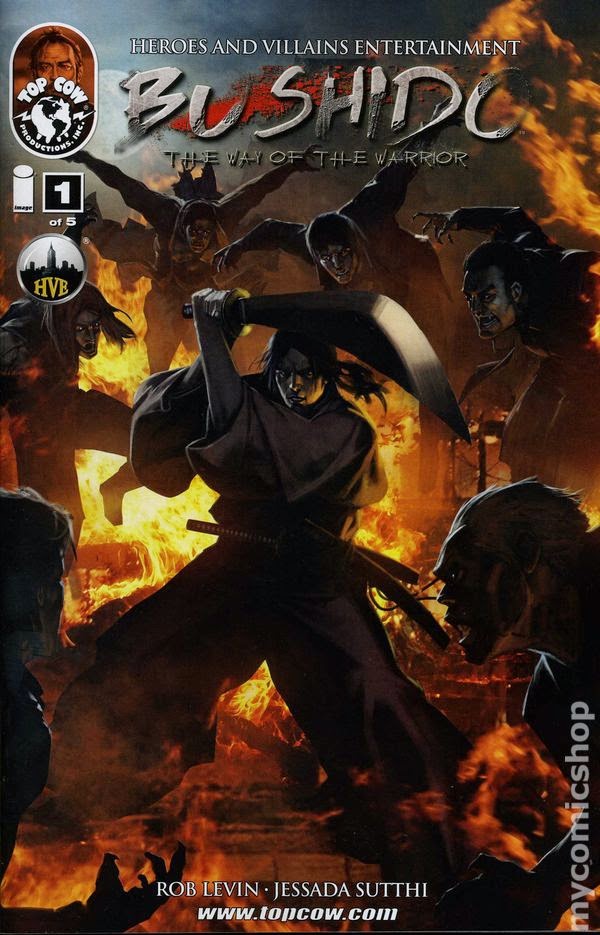 I thought a story about Samurai and vampires would be a winning combination but you know... I was wrong. Instead the whole story turned into another one of those "white guy in foreign land wants to be martial arts master..." UGH. He sure showed all those mean Japanese people. I feel kinda sick to my stomach when I read stuff like this. It reminds me of that awful Tom Cruise movie The Last Samurai... only with vampires. It really does feel like white English people appropriating another culture... like we do. Writer Rob Levin doesn't appear to be Japanese. Not that it's necessarily wrong to write stories like this, I just get this twisted feeling in my stomach. It's a thing Hollywood does. It generally sells, but I'm not a fan of it.

In case you were wondering Bushido is a Japanese word that translates literally to mean "way of the warrior". Akuma means "great demon", which they are using to describe the vampires. Originally released as a five part mini series from Top Cow, Images comics has now published this as a collected trade paper. I'm sure this appeals to someone. It really doesn't appeal to me. It was so predictable and the "evil" characters lacked logical responses. Everyone acted as a pawn to drive the story forward for the main character. They didn't feel like characters themselves. They felt like pawns.

I'm trying to understand why anyone would illustrate this script. So I did some digging. Studio Hive is credited with providing the artwork. Who is Studio Hive? It's a studio for hire which was founded by Skan Srisuwan. The studio works in more video games than comics from what I can tell doing some basic research. When you look at the artwork it's easy to make that assumption as well.

I really dislike saying bad things about comics. I hate that I hate this comic. Seriously, it makes me feel bad because I know how much hard work goes into producing them. BUT GOD DAMN I REALLY DON'T LIKE THIS BOOK. 140 pages and I was bored after a quarter of it. If you would like to read this book because you generally disagree with me and don't think there's any sort of cultural appropriation, then you can pick it up this Wednesday at your local comic shop. That's release day folks.
Posted by The Frog Queen at 4:58 AM