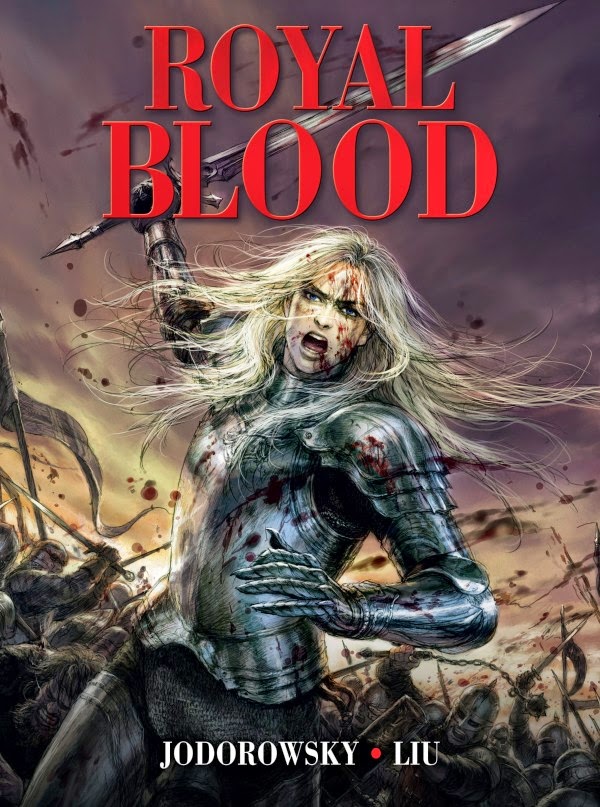 Once you start talking about one Jodorowsky book you might as well move on and talk about the next. I picked up Royal Blood released just yesterday from Titan Comics. As with all of his work this one was recently translated into English. I attempted to find the publishing date of the original graphic novel and I must assume is was 2011 from the copyright in the book. That makes this one of Jodorowsky's most recent stories.

I didn't know what to expect from this book. I am not familiar with Dongzi Lui's work and although it is beautiful, it's not something I typically reach out for at the comic book store. I think others have been more critical than myself on the subject. Bleeding Cool's Hannah Shannon wrote that Lui's " soft linework and dream-like evocation of medieval warfare" didn't impress her from the previews. Some commented on the resemblance to George RR Martin which I don't think is at all, an accurate thing to say. Sure there's incest, betrayal, crowns and beheadings, but I didn't see one dragon *snicker*  In all seriousness I think it's silly that people have got it in their heads that all medieval fantasy has been inspired by Martin as if he's some Tolkien. It's ridiculous! Quite frankly Royal Blood has more in common with Shakespeare and Greek mythos which inspired a lot more than Game of Thrones. People can be so short sighted. 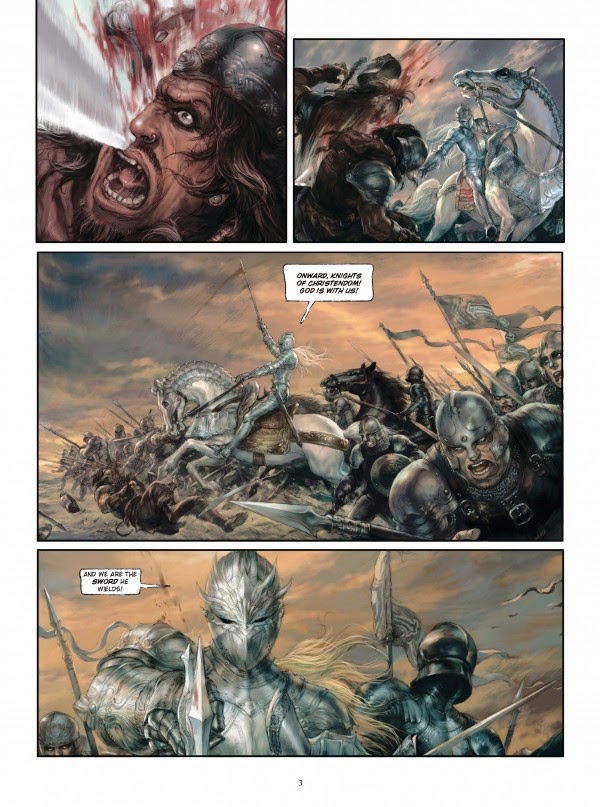 Anyway, I will hold my rant for now and tell you about the book. The book takes place somewhere in medieval times, possibly during the crusades because there is some talk of heathens and crusading for god. The story begins on the battle field with a Kings bloody betrayal. The book is in fact beautifully illustrated, although as previously mention, simply not my cup of tea. The story is about as comedic as that sped up video of the decomposing fox, BUT THAT'S NOT BAD! Even though I have come to expect brutality from Jodorowsky, I still find myself shocked by the tragic events that unfold in his stories. If you judged the man's outlook on humanity by reading his work, you can only conclude him to be the most jaded man on the planet. His characters have no redeeming qualities in the majority of his stories, except for the occasional repenting actions and show of guilt. It's generally just a "look how low I've sunk, maybe I shouldn't have killed that guy" thought bubble. There is no good guy, there is no one striving to be pure. They're terrible people (gotta giggle as I think back to the whole Christian crusade bit for above). They are selfish, manipulative, quick to anger and violent. Sadly, this actually describes the majority of world. Jodorowsky shows the parts of humanity we loathe. It also happens to be the parts that are really entertaining in fiction.

The best part about all the "incest" in the story is that it's not really incest. It's morally icky but it's not incest. King Alvar just THINKS it's incest which makes it interesting and pretty funny. In short, I think you're going to enjoy this one and I also feel as though it is simply not the end of the story.
Posted by The Frog Queen at 4:13 AM