Q&A with Tom Neely on The Humans 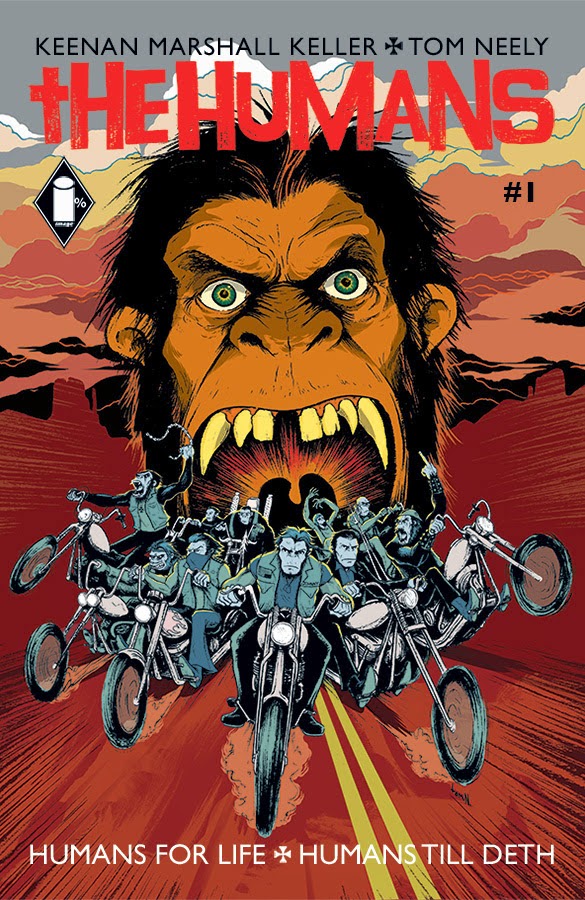 So you probably remember me going on about this title last week. Image released the debut issue of The Humans, a biker gang story with a Planet of the Apes spin! I am such a huge fan of Tom Neely's work and completely in love with this primate plot, so I decided to bug him for some information on how this all went down. Here it is for your reading pleasure!


TFQ: How did you come to work on this series? How did it all come together?

Tom: The idea came from my co-creator Keenan Marshall Keller. It was an idea he had for a screenplay about 10 years ago, but he never had the means to make a movie out of it. He and I became friends within the underground DIY comics scene years ago, and when he first told me about his idea for gangs of Apes on Motorcycles, I immediately went home and started sketching out ideas for us to develop it as a comic book series. It’s been a big change from both of our previous personal endeavors in comics, and it’s been a blast to collaborate with one of my best friends on our first “real” comic book!

TFQ: What was it like to create these The Humans? What did you use for inspiration?

Tom: It’s been a lot of fun developing it, and a huge learning curve getting used to drawing a book on a regular schedule. Also, I’d never really drawn bikes before, so I’m loving learning how to draw all the little parts of these motorcycles. Both Keenan and I are big fans of ‘60s and ‘70s exploitation cinema, as well as underground comics from the ‘60s through the present. We’re largely drawing from our love of things like Russ Meyer and Roger Corman films and the comics of S. Clay Wilson, Spain Rodriguez, Harvey Kurtzman and even Dan DeCarlo’s work in Archie Comics. I think we also derive a lot of inspiration from our friends in and around LA - we’re DIY/punk/metal/weirdos and most of our friends are artists, musicians, witches, anarchists, bikers and other assorted freaks - and we wanted to make a comic that is all about sex, drugs and rock-n-roll… and apes and motorcycles. So, even though neither of us are “bikers” (I ride, but I’m not trying to pretend) or “apes”, we are drawing inspiration from our own surroundings. And we wanna incorporate that into the book with the added things like the ongoing soundtrack that you can download two new songs with each issue - and extra pin-ups by our talented artist friends. 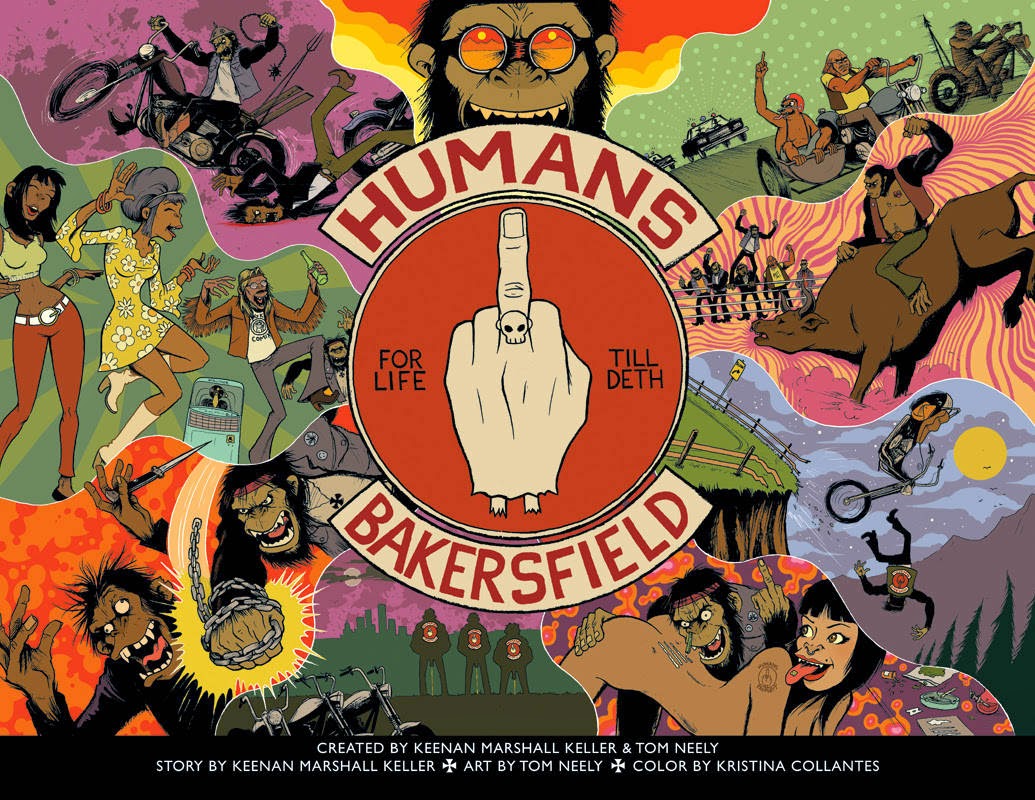 Tom: Well, I'm glad you were just grossed out by Ape genitalia and not screaming “sexism” at us because I tried to portray it as a consensual act between two friends working through their grief over a lost friend in their own hedonistic way. This comic is about a biker gang of apes. It’s set in the ‘70s. It’s free love, lots of drugs, and some things that might seem “sexist” if you’re not familiar with biker culture or if you’re not familiar with the history of comics and art. Look at the biker comics of S. Clay Wilson and Spain. Watch an old biker movie on Netflix. Hell - look at the comics that I’ve done previously - my previous graphic novels include a XXX erotic werewolf novel and a book that puts Henry Rollins and Glenn Danzig in a domestic partnership - I’m not afraid of sex or portraying sexuality in my art whether it’s gross or beautiful or hilarious. I’m a punk at heart - I will always be trying to push peoples’ buttons because I think that is what art is supposed to do. But it’s a friendly sucker-punch that I hope you’ll enjoy and laugh with me. I love that it made you want “to hurl” as much as the other guy who laughed at it because that’s a genuine reaction to something I drew! That’s a success to me, so I ain’t gonna stop.

TFQ: The cover really grabbed my attention back when Image first announced the series.

Tom: Thank you! We wanted a loud splash that didn’t look like anything else on the comic stand today! Half the credit goes to our brilliant colorist Kristina Collantes who did the gorgeous sunset and mountain range that really pushed that cover over the top! I’m really proud of the artwork we're doing on this series - I’m pulling out all the stops on my drawing and impressing myself every day. And then when Kristina puts her touch on everything it just blows me away - I hope the collaboration between Kristina and I will blow a few other minds in the coming issues.

TFQ: What kind of surprises are in store for us with the next issue?

Tom: Oh man - it only gets crazier - Vietnam acid flashbacks, gangs of bikers chasing down semi-trucks full of drugs barreling through the grapevine (a stretch of the i-5 between LA and Bakersfield), “Skin fights” (like cock or dog fighting, but with homo sapien slaves), a trip to a strip club called The Forbidden Zone, more biker gangs, lots of psychedelics, lots of bikes, lots of monkey mayhem all leading to a very explosive ending to the first arc with issue #9! After that, if we still have an audience, we have at least 4 more story arcs planned out for the future.
Posted by The Frog Queen at 6:28 AM