The Rise of Aurora West 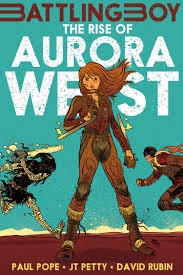 Wow, what's with the shitty publication choice? Aurora West is a spin-off of the New York Times Bestseller Battling Boy. First Second appears to have decided that it shall remain in lowly spin-off status by not allowing it to come in a lovely hardcover full edition format. Instead it's so tiny and floppy. It's basically made with newspaper print so big disappointment when I got this in the mail. Diving into the internet a little further it looks as though there was another printing which was paper over board for 5$ more. This doesn't make me any happier sadly. I really wanted it to look lovely next to my hard covered first printing of Battling Boy, proudly displayed with my many other Paul Pope books. Sadly not that case. I feel like it belongs in a comic box, in plastic so it will not wither away.

Moving on... I should explain that this book is a prequel to Battling Boy and documents the life Aurora led before the Death of Haggard West (story available as a floppy) and is part one in two-part series.

It should be noted that this was not illustrated by Paul Pope. That being the source of some sadness to me. So its seriously lacking that subtle way which Pope pulls each and every panel into a masterpiece. Instead it read like an airport book. Ah well. I had a hard time getting through it to be honest. It's also in black and white. At least my edition came that way. My eyes were wandering all over the page looking for beauty but I started having flash backs to when I read Disney Adventures when I was a kid.

All in all, I was so sad about this whole deal and let down. I kind wish I had not bothered to grab this book at all. SIGH.
Posted by The Frog Queen at 3:41 AM