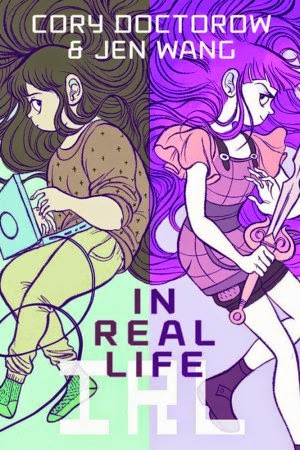 I was excited to read this story because the artwork is so adorably beautiful and it's about gaming. There's a nice little thought from Felicia Day across the top of the cover (you might remember her as star and writer of the hit series The Guild).

I've read some of Cory Doctorow's work previously and now that I've read this I'm wondering if Doctorow can write about anything other than Gold Farming. That's what this story is about although he's got a little intro in the beginning of the book to explain to you what the story is actually about. It's about GOLD FARMING and sure, yeah economics, yeah.

The plot begins with a young teenage girl Ada, who was never really into online games, plays D&D with her friends at school and that's about it. One day their class has a guest speaker who works on this online game and offers the best kids a place on her elite guild. I don't really get this part... and it actually stuck me as sort of creepy that an adult would do something like that, but sure... after school program or something? Anyway, Ada convinces her mom to purchase some online gaming time in this particular platform called Coarsegold. Doctorow even explains responsibly in the script how to do this: by asking you mom with sugar, sugar and cherries on top if she would please put the subscription amount on her credit card and accept cash to pay for it. We are now reminded of who the intended audience of this book is.

This brings me to an interesting point actually, do authors believe that since they are pandering to a new audience that they can simply recycle plots and ideas? As in, normally someone who writes novels, or scripts moving into the world of comics and graphic novels, re-writing stories with different characters and targeting a specific gender? Doctorow sought out the female audience here and even tries to type in the stereotypical handsome face at the end of the story with a royal fancy GALA! Ada's warrior self is in a fancy dress being asked by a "handsome man dressed in white" to dance. It ends like a Disney movie with dancing, celebration, a prince and princess. Even worse is that you read the whole thing thinking that Ada is a kick ass character fighting for equality and justice, in her game (and the world), only to be led down the path to this rather rudimentary conclusion. I felt ripped off after I reached the ending. I  was kinda pissed. 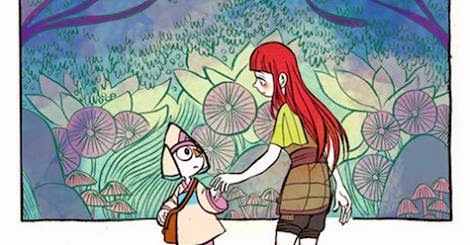 One major redeeming quality of this book is Jen Wang's charming artwork. She manages to show Ada as she is in real life, an average a girl with an average frame and then this avatar. The avatar created by Ada is slim and idealistic as is generally the case with games. Her coloring is so lovely and it really is completely uncontroversial while appealing to readers of different age groups.

End of day, I think the story feels mostly condescending despite trying to talk about how not everyone has healthcare in the world, and address workers rights (as did his novel For the Win). The way it's directed at girls and women, and the ending... it does feel like a let down. Thankfully Wang is able to make beautiful panels throughout that can help us see past this plot failures.
Posted by The Frog Queen at 5:56 AM