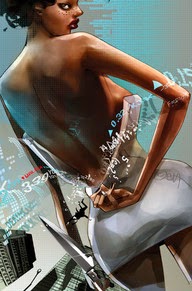 I know I'm a little behind in the posts this week guys but it's been a tough week of BF4. I gained a shit-ton of levels but I have a long way to catch up to people who have been playing non stop for the last year. ANYWAY, I did get all my singles read but have been so behind in talking about them.

Everyone knows how much I love Peter Milligan. Shade, X-Statix, Hellblazer, they all made me HUGELY happy. The way he writes has always provokes a strong reaction from me. So when I heard about the new mini series on Vertigo, I got tingles. I wasn't totally sure what to think of a Milligan written revenge story. In a way, much of the end of Hellblazer can be viewed as a revenge story. However after reading The Names, I don't think there is a whole lot of supernatural involvement LOL.

The first issue managed to grab my attention right away. I put down the game controller for a whole 20 minutes as I studied the panels. I got to thinking why people weren't upset about the artwork like they were about the Manara cover but that's just it, comic fans know better. I suppose most people cannot see the difference between sexist and sexy. The main character of The Names is 25 year old Katya. From what I read in the first issue, she appears to have an interesting past that has been very much buried. She's strong and independent despite how others view her. She married an older man with money, so the people who eliminated her husband see her as a gold digger and not really an immediate threat. Until of course, they realize how lethal she is. Also, Katya is damn sexy. I'm surprised people haven't freaked out at the sexually suggestive nature of the cover like Manara's Spiderwoman cover. Katya doesn't exactly have the average female body.

I'm not trying to knock the artwork here. I actually really like  Leandro Fernandez and his work. He has a pretty extensive career with Marvel and he's pretty damn young. When I look at his character design I sometimes find myself thinking of Aeon Flux. Not that that it's all that similar but some of the odd proportions get me thinking of the show. Final thoughts, I'm very excited to read the rest of this story and I hope people don't start lashing out for no reason but I think they would have already attacked most of the comic book industry by now.
Posted by The Frog Queen at 4:53 AM