Some people were celebrating Labor Day yesterday, Canadians, which means some of us won't be getting our comics tomorrow. This is due to delayed deliveries because of the Monday holiday. Although not all shops will receive late shipments of new releases, most of them in Halifax do.

The All-New Doop is coming to an end so you best grab #5. I'm a huge Milligan fan. HUGE.

The highly anticipated Death of Wolverine begins this week with issue #1! There are eight variant covers and 4 Deadpool Memorial Variants! I haven't decided which ones I'll pick up. How do you choose with sooo many?!

The Names #1 struck my interest because not only is it a new Vertigo title but it's written by Peter Milligan. This is a new 8 issue mini series from one of my favorite writers of all time. Vertigo tells me this is supposed to be a "dark, contemporary thriller set in the world of Big Money". If past works are an indicator, I think it'll be more than just dark.

Now I'll buying the Oz Omnibus. I have read bits and pieces of Skottie Young's beautiful illustrations in this new rendition of Frank L. Baum's Oz series. This is a full color, hardcover edition of Marvel series. It collects the following story arc's THE WONDERFUL WIZARD OF OZ 1-8, THE MARVELOUS LAND OF OZ 1-8, OZMA OF OZ 1-8, DOROTHY & THE WIZARD IN OZ 1-8, ROAD TO OZ 1-6, THE EMERALD CITY OF OZ 1-5, MARVEL ILLUSTRATED: WIZARD OF OZ SKETCHBOOK, OZ PRIMER. I have been waiting
for this to come out for quite sometime and have abstained from purchasing trades and collected volumes of the series. For people who have read the Oz novels, this series is great because you can jump in at any time and be familiar with the previous events as it follows the novels almost to the letter.

Finder: Third World is the first full-color collected story from the prolific award winning series. Finder is an amazing series dating back to 1996 by Carla Speed McNeil who describes it as "aboriginal science fiction". I am the proud owner of volume 1&2 of the Finder Library which I am currently reading. Since picking up the first volume I have been recommending the series to all my science fiction-fanatical-friends. I am totally in love with the characters and this world. Much of this futuristic Earth is rooted in political and social issues which are recognizable today. McNeil deals with issues concerning domestic abuse, racism, gender, eugenics, and a number of controversies and current important issues. Let me not mislead you though, it's not all serious. McNeil is really witty. I absolutely love the script and find myself twisted from laughing then being horribly upset and fearful for my new favorite characters. 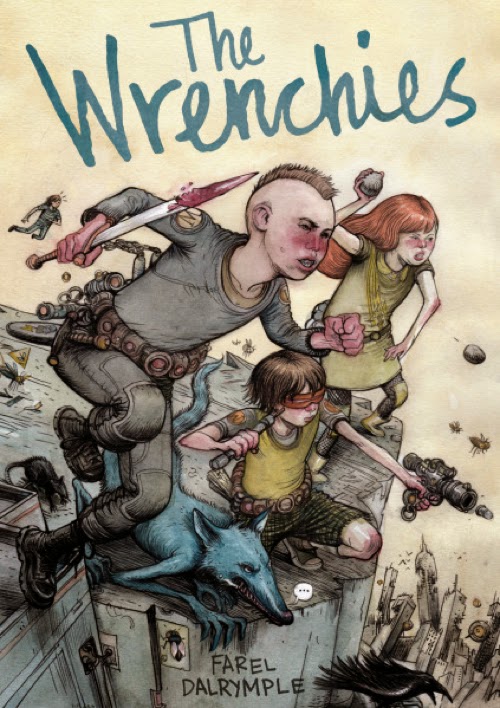 The Wrenchies is a new release from First Second written and illustrated by Farel Dalrymple. Dalrymple's work is beautiful and you guessed it, right up my alley. I first discovered his work through Prophet, Brandon Garham's baby currently running on Image. The Wrenchies has been described as a Young Adult book. For some detailed info about this I'm going to simply direct you to the article on Comics Alliance because I have to read this exciting book.