An Oldie But A Goodie : Batman Secret Origins Special 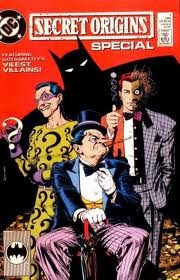 I managed to get my hands on this because of my friend Ben who works at Strange Adventures in Dartmouth. He's a very knowledgeable chap and sent me a message saying I best get down to the shop. That was back when I was walking. I read this a while ago but hadn't posted anything about it. I was thinking about it today when I picked up my copy of the Batman Future's End one-shot.

Various stories have been published under the title Secret Origins over the years. The stories features the origins of various characters that in the past hadn't otherwise been much explored. Although various origin stories have been written for the characters of Gotham over the years, I like to think that the original, origin stories kind of reign supreme. The first one-shot was published in 1961 and contained re-printed stories. The title has since been recycled over a half dozen times since. The most well-known series ran from '86 to '90 for 50 issues.

In 1989 Special 1 was released containing the secret origin story of The Penguin by Alan Grant and Sam Kieth, The Riddler by Neil Gaiman, Matt Wagner and Bernie Mireault and Two-Face by Mark Verheiden and Pat Broderick. You can see how this would interest me. Anything that Sam Kieth touches immediately grabs my attention and Neil Gaiman writing The Riddler is just so perfect that Gaiman makes the Riddler appear more psychotic than ever through the eyes of Gotham reporters.

I think The Penguin story is possibly my favorite origin story in the book special. It's one of the most enduring character origin stories to this day. Alan Grant even came back post-Crisis to writer the character again. So I sort of feel that Grant is the definitive authority on all things around the character. Whether or not that's true.... lol is another story. That's just how I feel.

I have been on the subject of the best Batman comics of all time, for about a month now. This is definitely worth reading if you can get your hands on it. It's an important contribution to the world of Gotham for certain.
Posted by The Frog Queen at 7:39 AM