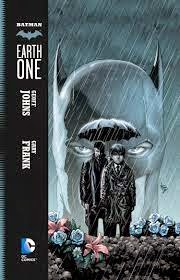 I can't say the name Batman in my house or it turns into a back and forth argument of which one of us is Batman. Sometime Chris reads to me and does the voices when my eyes are tired. Let's face it, I read ALL day. I like his Lt Gordon. Anyway, I read Earth One to myself last night and drooled over the panels. So lovely. Gary Frank's artwork caught my eye initially and with the trade release yesterday I was like "oh hell I'll grab this".  The original release happened back in July of 2012. It got to #9 on the New York Times Best Selling Hardcover Graphic Book list so the trade paper of course says "New York Times Best Seller" on the top.

I don't want to spoil the plot so I won't get into it much. This is basically a new origins story. DC intended to start a series of re-imagined origin stories for the DC universe under the title of Earth One. They started with Superman which I've been told to ignore. Apparently it's gawd awful but it's fine because I've never been one to read Superman. If I recall, the only Superman comics I read were a few random issues when I was very young. Maybe ten or eleven at me grandmothers house.

This story shows us a grittier Alfred and a fairly gritty Gordon. Sadly, daughter Barbara plays the part of the damsel in distress to serial killer The Birthday Boy but there is a little hint, hint that she begins to develop Batgirl. So at least there's something to look forward to if the sequel actually gets pushed out in 2015. It's already been once delayed. Originally it was due 2013 but something went array there. Perhaps other projects merely got in the way.

In the end I just keep comparing this to Frank Miller's Year One. Nothing really stands up to that however this is still worth a read just so you can drool over the artwork.