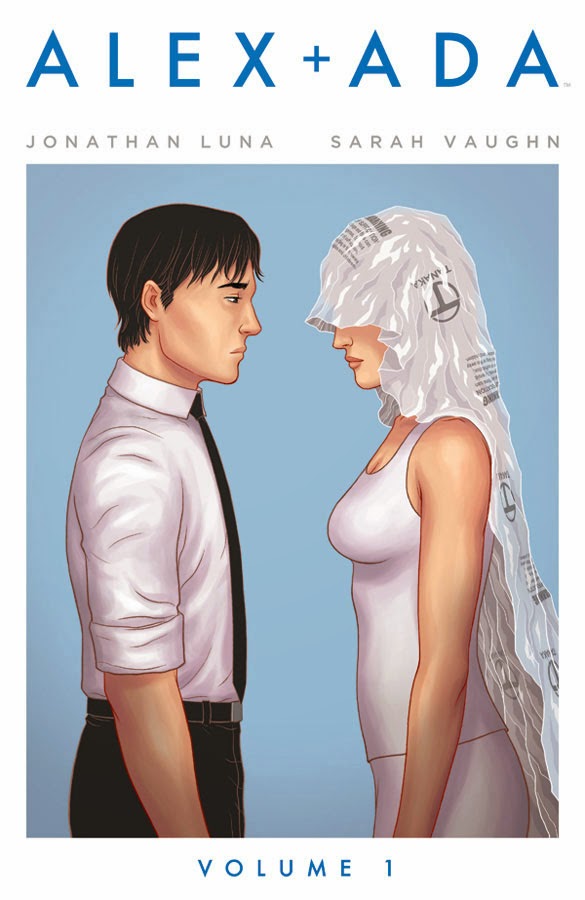 I feel like I already wrote about this book but I went through my articles and didn't see anything. So I thought I'd go ahead and type something up. I ignored this series for quite sometime. Try an entire year then got a press release from Image talking about the trade paper release a earlier in the summer. They sent me a review copy of volume one and it got misplaced under all the other stuff I had to review. Well I got to it over a week ago and forgot to write about it. Honestly, when you read as much as I do in one day sometimes you forget about the books you wanted to write about.

I was surprised by this series. I really thought this would be just another Americanized version of Chobits. There's a whole new angle with this boy meets android-girl sort of love story. In this story Alex turns on Ada's ability to be sentient. He makes that choice where in other stories this was not the case. The story is written by both Jonathan Luna and Sarah Vaughn with Luna illustrated the entire book. The artwork isn't exactly my speed but for something this clean and crisp I actually kinda like it. It's just a little different for me to enjoy a book that looks like this.

Alex and Ada is currently running on Image Comics. You can buy volume one and then hop right into the singles. Now is a good time since issue 8 was just released and follows in perfect time behind the first trade. I however have decided that this title will be best read through trades so I will be waiting about 6 or 7 months to purchase volume 2.
Posted by The Frog Queen at 6:47 AM