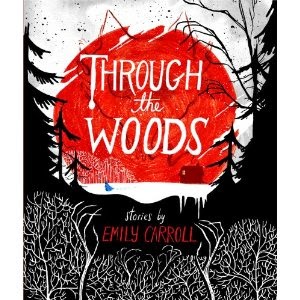 Thanks for checking out another Northern Highlights article where we talk to Canadian comic book artists and creators. I was lucky to get an advanced copy of Emily Carroll's upcoming book "Through the Woods" which is being release July 15th. I also got to ask her some questions about the book. You can check out my review of the book HERE but first please check out my Q&A with Canadian author and illustrator Emily Carroll. Be warned there are some small spoilers but nothing that will impact your curiosity and wonder in the stories.

TFQ: Through the Woods contains stories inspired by fairy tales. When we  think of fairy tales, many of us tend to think of stories that take place during medieval times. How did these fairy tales affect your childhood and do you think the fairy tale has an important place in modern life?

Emily: The first fairy tales that I heard the most when I was a kid were, to be honest, modern day urban legends. I didn’t realize they were popular folklore of course, I just thought they were terrifying stories from some book I’d never seen -- told to me and my cousins by my dad over, seriously, a roaring fire. Honestly, I didn’t start reading properly scary fairy tales -- as in Grimm’s and the like -- until I was maybe eight or nine. Until then it was all urban legends and folklore masquerading as scary stories for kids (as in the case of Alvin Schwartz’s amazing Scary Stories to Tell in the Dark series, which I only appreciate more and more as I get older). Those, and myths from Ancient Greece or Egypt, were what I loved reading most.
I think these stories still work because they do away with all the trappings of being overworked and just deliver a pure, primal terror (or wonder, or joke, etc etc). There’s so many different versions that you can choose a favourite to tell, or put your own spin on it without detracting from the original too much. You don't even necessarily need a book to read them from. The characters aren’t laboured, and are largely archetypal -- I think they’re pretty accessible, particularly for children, who have the capacity for accepting the weird logic these sorts of stories tend to have.


TFQ: Your stories each contain a twists on classic folk & fairy tales. They contain indefinite endings which play on the readers fear of the unknown. What really happened to the main characters at the end of each story. In particular the ending of "His Face All Red".  ( I had developed a theory that the dead brother didn't come back and that the main character was driven mad by his actions as he claimed his brothers place in the lime light. But then the ending threw a curve ball at me.)

Emily: Honestly, I generally don’t know what happened to them, because by that point the story’s over and I’ve told all I set out to tell (except for Mabel in The Nesting Place -- I like to think she goes on to become a paranormal investigator and hunts monsters).
I’ve received this question for “His Face All Red” many times though, mostly because it’s been up on the internet for years now and seems to get a new punch of traffic every Halloween. So I will say this about “His Face” -- the story ends in blackness, in a small space, with the two brothers confronting each other at last, and I’ve always liked to think of it as a curtain falling. Whatever those two characters have to work out, it is intensely personal, and must be done alone, without even the light of a lantern intruding. I can’t think of anything scarier that would happen past that moment than the simple visual of the light going out and the protagonist being forced to do nothing else but face his demons alone.
In general though people read that story a number of ways -- including the way you mentioned -- and I think it’s cool and I’ve liked a lot of the interpretations. I wrote the story pretty literally though. Actually, I’ve revisited the same setting again and again -- that specific forest -- in other webcomics such as “Margot’s Room” and “Out of Skin”. I think of it as a haunted place, one which plucks out your deepest, most shameful fear (or hope) and delivers it to you -- after a fashion.

TFQ: In the fairy tales many of us grew up with, central female characters are portrayed as naive and often blamed for their own misfortune despite the acknowledgement of the existence of "evil". When I read the stories in Through the Woods, I don't feel as though your stories have the same cautionary intentions as those fair tales. Was this a conscious effort on your part to create a more positive role for female characters and place more fault on the antagonist?

Emily: I wouldn’t say it was conscious, no -- in general I try to write pretty intuitively, and then examine what I’ve written as I go. I do have a preference for writing women characters though. Actually it wasn’t until I’d written all the stories for the book (excluding “His Face All Red” which was written a year earlier than any of these, for my website) that my wife pointed out all the main characters in the book are women or girls, whether they are the heroes or the villains.
I would also hesitate to call any of the characters I’ve written as positive, necessarily. I think, of any genre, horror is a place to let a hero exhibit less than stellar character traits and yet still -- by virtue of their terrifying situation -- let them be sympathetic somehow.  So I guess in the way that I hope they are human characters, capable of missteps and mistakes just like anyone else, then that is a positive portrayal in and of itself. Yvonne, the narrator in “My Friend Janna”, is supposed to be cowardly, just as the heroine in “A Lady’s Hands Are Cold” is actually intended to be rather naive, and both of their stories are about them brushing up against that truth about themselves and the reckoning that follows.
I will admit though, I think this book is largely informed by those cautionary tales I was told as a kid, and that this is just how it’s come out down the line after being sifted through my subconscious. Especially the final story, with the wolf at the window.


TFQ: For me, the most disturbing and shocking illustrations are in The Nesting Place. What was your inspiration for this story?

Emily: Though the story actually takes place in the early 1930s, Rebecca’s design was inspired by fashion plates from the 1920s. These are the ones that depict very tall, thin, elegant-yet-sporty women as the pinnacle of health and good looks, while at the same time looking extremely stylized and decorative in terms of proportions, eyes, posing etc. By that point I’d already had the idea for a monster that inhabits borrowed skin and stretches it to change appearance in order to infiltrate human society -- and the idea of such a creature inhabiting a body and manipulating it to look like an Erté drawing seemed like a good fit (in large part because I love Erté and it would be fun to drawing a character like that).
I also liked the idea of this creature being able to hide in plain sight because she is able to pull off this strange, almost artistic, ideal beauty, but that it’s just a trick she is capable of, like juggling or any other sleight of hand. I wanted Rebecca to be very knowing and aware of what she is doing. So I think those shocking images you mention -- which are my most wanton gross-outs in the book, I admit it -- are almost representative of Rebecca bragging, showing off for Mabel, who has already seen what she truly looks like.

For more information about Emily's work please visit: www.emcarroll.com
Through the Woods is released on July 15th so be sure you get your copy from your local comic book retailer or pre-order online.
Posted by The Frog Queen at 4:30 AM

Email ThisBlogThis!Share to TwitterShare to FacebookShare to Pinterest
Labels: Emily Carroll, Exclusive Interview, Through the Woods