War of Streets and Houses by Sophie Yanow 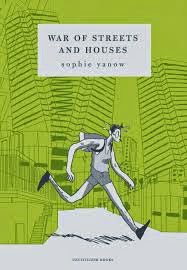 I didn't know a whole lot about what happened during the 2012 Student Strike in Montreal. I read the news articles online as it was happening, as the public was being updated. I had friends in Montreal at the time but I wasn't certain how many were participating in the strike. I certainly had little contact with them from Nova Scotia. Author Sophie Yanow was there. She was there among the police kettles. She can account for what happened and in this aggressively, insightful reflection she gives us a look into those events. She discusses the significance of urban planning and it's military history.

What little I know about urban planning was learned playing Sid Myers Civilization games and how to build a city so that some barbarians don't come around and topple your shit. I realize that isn't exactly an advanced knowledge but it comes as no surprise to me that urban planning would have military roots. So in the midst of reading this book I went to the internet to do some research. Yanow explains most of what you need to know. She talks about the famous text by General Thomas Bugeaud which influenced Baron Haussman's re-development of Paris.

With the ultimate minimalist's pencil, Yanow reflects on the police kettles as protesters come to a boil under the pressure of containment. Protesters are denied washroom facilities, food, water, shelter, not allowed to leave their positions in the streets, until finally ticketed with fines. Although kettling has been ruled lawful by the European Court of Human Rights, it's clear that this is an indecent act and infringement on one right to protest. "If I had to hear one more person describe a broken window as violence.." and powerful quotes like this stand out in my mind. She also addresses the issue of masks that became international news. While telling the story with an air pious distance, Yanow is able to tug at our emotions. This ambitious graphic novel will speak loudly to the student in all of us, fighting for our right to an education and a future free of poverty.

Email ThisBlogThis!Share to TwitterShare to FacebookShare to Pinterest
Labels: Sophie Yanow, War of Streets and Houses