Umbral Book One: Out of the Shadows 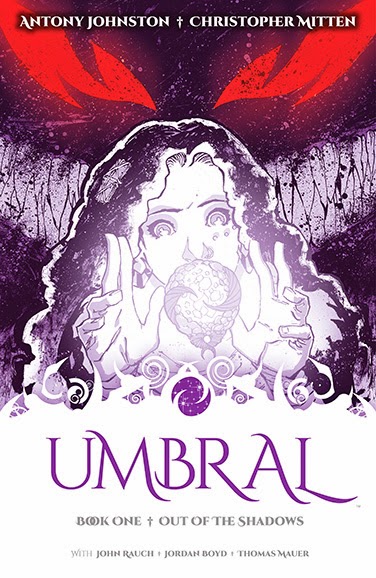 Everyday that I ventured into a comic book store, I would notice these Umbral books. I wanted desperately to pick them up but I had somehow missed the release of number 1 while I was travelling. So when I finally noticed, issue 2 had been released and I couldn't get a copy of the first issue. Such is luck sometimes. I find it very difficult to re-order comics in this city. If you didn't get it on release day and they don't have any left, most of the time you are not getting a copy. This happened to me with Sweet Tooth and I'm bitter about it. Very bitter. If it's not a Marvel title, don't count on it being re-ordered. Long story short, I decided I would wait for the trade paper. Obviously, after I read the book I decided I must speak with the author. You can find the mini-interview HERE.

Here's the rundown: The story centers around a young girl named Rascal who is flung into a tumultuous journey. All the while a kingdom is silently overthrown and controlled by the shadow monsters known as the umbral. Rascal alone witnessed the usurp.

While reading the book I noticed distinct similarities to The Lord of the Rings. Of course accepting that the trilogy has influenced so many fantasy artists and authors, I still drew direct comparison to many plot devices.

In Umbral, the main character Rascal comes into the possession of a magical object which is of great concern to everyone. It is also greatly desired by the enemy. This is called the Occulus, a glowing pink stone which has powers that cause others to desire it, and sometimes fear it. This reminds me of the ring. It possessed and seduced with it's power but also caused fear in those who knew it's power of seduction. It also held the power to suck the holder into another world of shadows, just like the Occulus. This shodow world in the story Umbral is known as the "umbral". The word Umbral is derived from the Latin word umbra meaning "shadow". So it's all very thoughtfully titled and wow, I just had to say umbral a lot. (say it agian, okay- umbral).

There were other similarities that stood out. There is a magical enemy, and one helpful wizard. However magic is feared. Wizards and spell casters are taboo in this realm. It reminded me of the utter lack of magic the regular folk had in The Lord of the Rings. Magic was reserved mainly for the evil and apart from Gandolf, is made of little use of by "good" characters or common people. Yet the world works on magic and the main characters are surrounded by it and enchanted objects.

The last significant parallel that I can draw from Umbral to TLOR Trilogy, is the piece when Rascal decides along with her wizard accomplice, that the Occulus must be flung into "the pit". The mine from which it came, should be the only place where it can be destroyed. It's power too dangerous to be allowed to exist, should it fall into umbral hands.

Despite these parallel's and similarities, Umbral does not at all feel like an appropriation of Tolkien's ideas. In actuality, it's another work of modern fantasy that has been influenced by the greats of the past. It is refreshing to see fantasy inspired by TLOR trilogy that doesn't include orcs, elves and humans at war. From a female perspective, it's especially important to me that the story centers around a capable and heroic young woman. Rascal is forthcoming with her opinions, brave and resourceful. I can't wait to see how she handles herself against the corruption of the umbral. Rascal is a female character young women can admire and look up to. She brings to mind other strong leading female roles such as Hayao Miyazaki's Naussicaa, making Umbral an awesome addition to empowering female fiction.

UMBRAL #1 is now FREE! Yep, you can get the digital version of our first, extra-long issue fromComixology or the Image website for zero of your earth dollars. And it’ll be free right through until UMBRAL #7 goes on sale, in July.
Posted by The Frog Queen at 10:44 AM