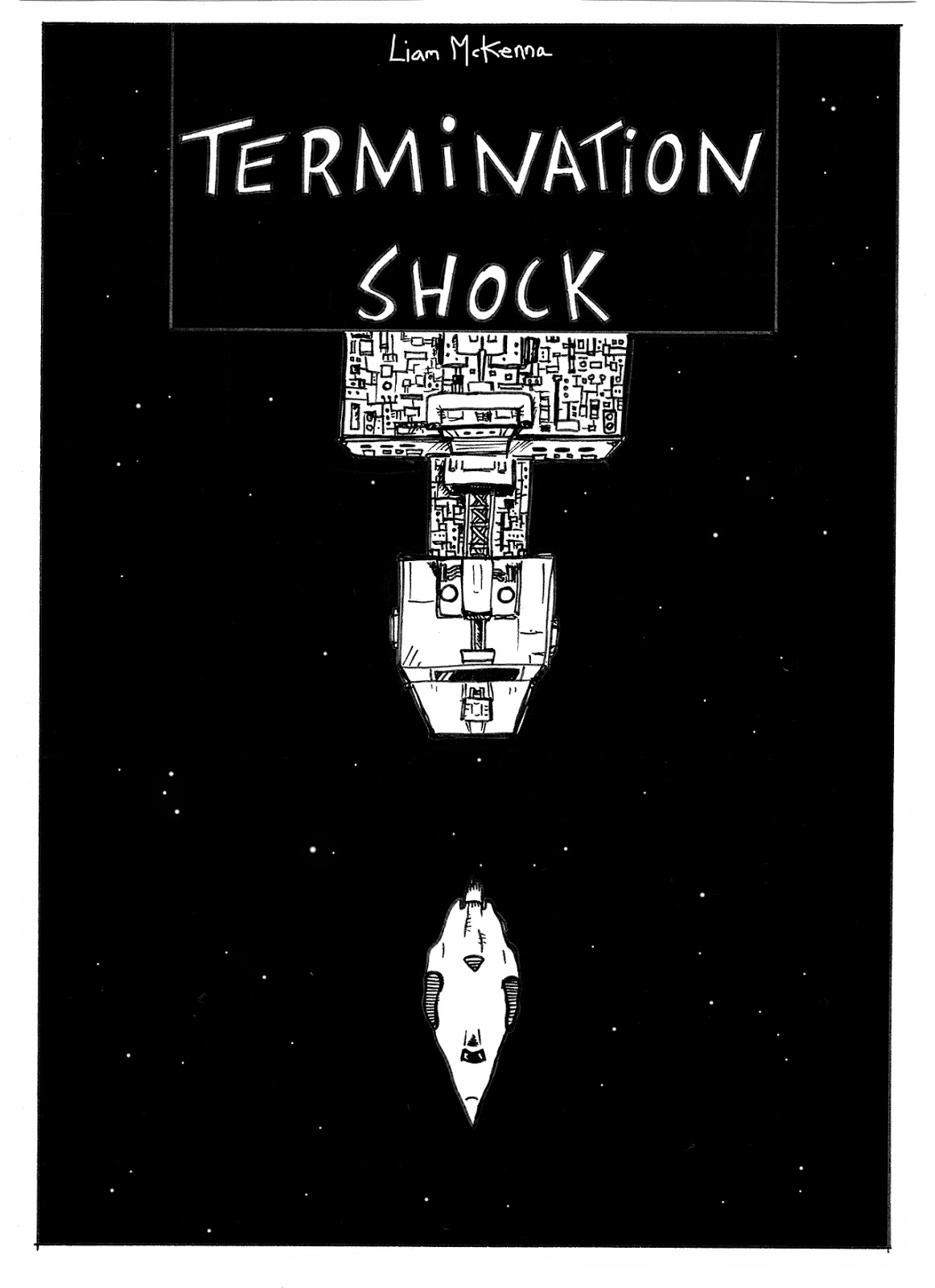 PEI resident Liam McKenna debut's the story Termination Shock both online and in a hard copy edition. Liam describes this piece as a "dreamlike story of a team in space that is nonetheless ground with internal human conflict." The story is a preface to a larger adventure that will debut this summer. You can read the full story here:
http://www.oldsoulscomic.com/tagged/terminationshockcomic/chrono

The story begins with a group of space crusaders dealing with the emotion fall-out of abandoning a team-mate to certain death in space. The illustrations of the space ships have to be my favorite part artistically speaking. I am not a huge fan of all the character illustrations as I felt that many of the facial expressions missed the intended emotional mark. However, this cover is completely up my alley and McKenna's style has an indie richness I've always appreciated. One of the reasons I'm so dedicated to independent artists and writers.

I wanted to ask Liam a little bit about how he developed the story as preparation and method are of great interest to me personally. He told me:

"I first got the idea for "Termination Shock" over the Christmas holidays in 2013, and began making a few pages of it at that time. I was planning on having a long form story and posting full pages weekly. I found the process of posting a page at a time to be a fun challenge, as opposed to a short weekly strip as I had been doing previously, but I soon discovered a new set of difficulties posting that way. I felt like I was losing the larger narrative in favor of short, dramatic updates.

So, for the end of "Termination Shock," I worked on four pages simultaneously for a two week period, and I found the story flowed more naturally. As my first Kickstarter was successful, I finished the work, printed the book and brought it to the East Coast Comic Expo on May 17th. It was nice to hold my first ever minicomic in my hands and go to my first con as a vendor, but it was also evident that I had some work to do with my writing, my art and how the two came together, so I immediately began planning my next story."

Liam tells me that his next story entitled Fatigues will be completed this summer. He will be attending the Dartmouth Comic Arts Festival this August and will have both stories available for purchase. Make sure you get to DCAF to meet Liam and check out his work.
Posted by The Frog Queen at 4:15 AM