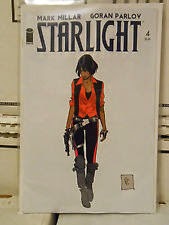 So I started trying to get an interview with Goran Parlov. This so far has been unsuccessful but I would like blame his busy schedule and not my lack notoriety. LOL. It's probably the latter though. Until that time comes that I receive word back from Goran, I will continue to list my thoughts on the issues of Starlight. So, thoughts:

I always pick up the cover which is done by Goran. For this issue there are three different covers. I got the one you see attached of course because Goran's covers are by far my favorite. As a general rule, I never collect more than one copy of an issue unless there is a particular artist who's a favorite (someone like Brandon Graham) doing a variant cover. For this issue we have two other cover artists Travis Charest and Pasqual Ferry. Both great artists but for me, it's all about that pulp-ey, pop art kind of thing. A bit of that retro feel that Goran has in spades.

As for the story line, we last left our hero in prison with an alien who had a thing for 20th century earthling fashion and our pink haired little star child. However, it isn't long before they are all busted out by the rebels and taken to the secret hidey hole. Okay, it's less of a hole, and more of a worm hole that transports them all to another planet. The planet that was home to giants apparently before the last war. There's some awesome Miyazaki-esq giant remains laying around up against trees and such. That is really fucking cool.

Millar is writing this story like Burrow's saga. Each issue letting a little bit of each characters background slip. It sort of reminds me of Flash Gordon with the distinct good and evil factions. Although I'm use to very adult stories from Millar, as most of us probably are, Starlight feels much more child friendly. However, it could simply appear that way in it's infancy as this is only issue 4. To date the story is devoid of gore and adult situations. What does the future have in store for our characters though with a rat in their midst?
Posted by The Frog Queen at 5:53 AM