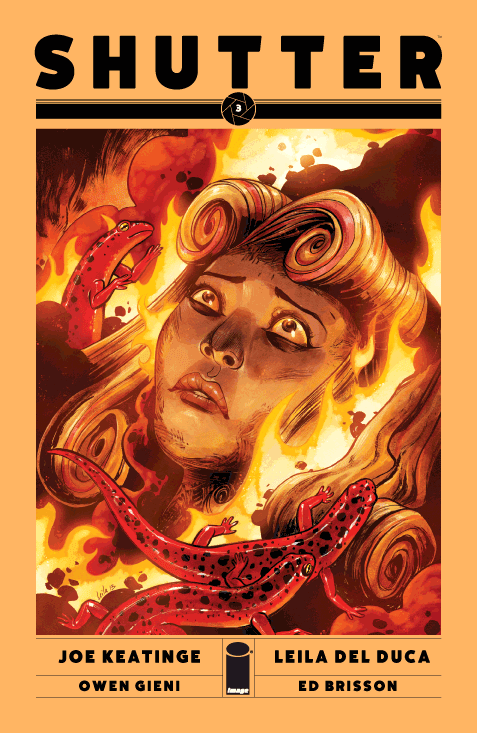 So the third issue of Shutter came out yesterday. Yesterday was a good release day. I mean, I was really impressed and had a field day at the shop. I actually also got really good service from an employee at Strange Adventures and that is totally shocking to me. He mentioned that he could get me copies of the two compendiums of The Darkness. I said "great! order them!" but I won't hold my breath. For some reason they aren't even available online. Not used or otherwise. It totally sucks. I've really wanted to sink my teeth into that series. Anyway, I've wandered off course...

Shutter is of particular interest to me visually as there seems to be a deep connection to childhood characters of the 90's within the illustration. I had to pose the questions to illustrator Leila Del Duca. As you may have read in my past review of issue 2, there was a shocking similarity between the round robotic character and the character Tic Toc from the movie Return to Oz. Now reading issue 3, I notice immediately the shocking similarities between the cat character on pages 1 & 2 who looks so much like one of the characters in Richard Scarry's Busy World. Finally I have to conclude was this all done on purpose but for what reason? Even our heroine's side kick is a recognizable cat-clock. Big questions and hopefully they are not offensive questions.

Something I noticed about this series, which is I picked up more on in this issue than the first two, was the way that Del Duca changes artistic styles between scenes that divert from the scenes involving the main character. I like this sort kind of thing which makes you feel as though you are viewing a situation through a new character's eyes even if you do so behind the 4th wall. I'm intrigued, I wanna know where all this is going. I also have to praise the inclusion of a trans character. It's nice to see more people represented than just the usual white male/female combo. I feel like I could write a novel about this series.... okay, maybe an essay but I'll try and save some topics and insights for the next issue ;)
Posted by The Frog Queen at 5:15 AM