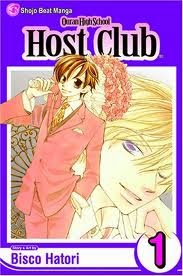 So my friend gave my a few volumes of this series. I read the first one last night. This is one of those light read Shojo books. So far, there really isn't any seriousness to it at all. It centers around a ridiculous Host Club. This requires some explaining:  In Japan these places exist where you go to an establishment to be entertained by a paid for date. It's not prostitution, it's fantasy. Like having a boyfriend or girlfriend to hold your hand and chit chat with you. Charmingly of course. It's more verbal flirtation. However, in this book the Host Club is just a school club made up of the elite, rich male Oran High School students. They are mostly vapid, egotistical boys who all have charming physical qualities.

The big twist here is that their newest member who is a poor scholarship student, is roped into working off debt for breaking an expensive vase. So he must begin entertaining privileged young ladies within the host club. The funny part here is that he is in fact, a SHE and the Ouran Host Club neglected to notice.

The one thing I like about this book is it's ambiguity around gender and socially accepted Japanese gender roles. Sexuality is also a subject matter that  comes up often noting that homosexuality, while not generally accepted in their social order is still talked about and practiced.  However, there appears to so far be some confusing dabbling in bisexuality rather than any serious relations between same sexed characters. That being said it's not an unhealthy environment and was probably considered extremely liberated in the time the story is set to take place. Just be warned that there are still some stereotyping but the book seems to use them in a humorous way as an effective means of dispelling them and any harm. At least this is my impression from the first volume.