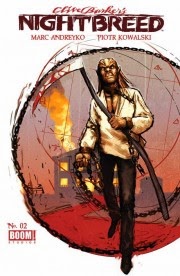 A little more mysterious. It's been a long time since I've watched the movie so I believe most of this issue is an embellishment on the original story. I am a really big fan of these covers. This one is a combined effort between Riley Rossmo and B. Christopher Mitten.

For those of you unfamiliar with the story of Nightbreed, I'll let you know that the beasts or rather monsters of the story are in fact, more humane than the humans of the story. In case you weren't totally sure who to root for. It's the Nightbreed who are forced into hiding since the over population of humanity on the Earth. I'm anxious to see some of the artistic renderings of the other characters I'd admired from the movie. So far all interpretations have exceeded my expectations.

It would actually be really awesome if they put out a hard cover edition after the final release of the series.
Posted by The Frog Queen at 5:59 AM