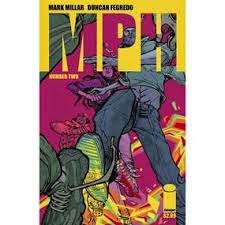 How sweet is this damn cover?! Woah of course you're asking, which one Amy? If you follow me then you know which one I'm talking about. Eric Canete's cover (the one pictured). The variant covers are in honor of the 10th anniversary of Millarworld and can be placed side by side to complete one picture. They're nice and all but I don't buy variant covers unless I'm absolutely in love with the artist commissioned for said variant cover. Let's move on shall we?

I think my favorite thing about this issue is that Roscoe gets to pay back his old boss back for double crossing him. He also gets to grab his best bud and his girlfriend. He wisks them away to California in an instant and has them try out the MPH pills.

I think revenge is an awfully powerful plot device. So many plots are built on the struggle to achieve justice or vengeance. It's often the central theme of a story but here it's being used as a mere means to show off the power that this mysterious drug holds. Well, it's just nice to see someone look satisfied once in a while. Roscoe's intention now is just to live day to day outside of poverty. As he says, they could be billionaires. Roscoe's plans are mostly selfish in origin.What would you do if you had the MPH?
Posted by The Frog Queen at 3:52 AM