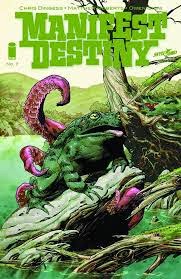 A tad late in posting this. Issue 7 came out last Wednesday. I read it last night because it got stuck under some other books and issues... well you know it works. If you saw my bedside table, you'd understand. My sweet boyfriend bought me a new bookcase for our anniversary so that I wouldn't keep such a mess beside my bed.

Anyway, issue #7 picks up where the trade paper back release leaves off. So if you got yourself the TP, and now need the singles, you're picking up in the right spot. Our group of pilgrim refugees, United States Military officials and criminals are sailing up a river until they get stuck on a large under water arc. Well, you can guess that this spells trouble in the form of giant frog which we see on the cover. In Dungeons and Dragons, giant frogs are mystical beasts. They are in the first edition of Advanced Dungeons and Dragons which considers them neutral in alignment and mute. I wonder what these giant frogs are going do? You get the impression that they are not so neutral in alignment. Plus they have like three tongues! That's got evil monster written all over it am I right?

As usual Manifest Destiny continues to be action packed, entertaining and colorful! I love the coloring actually, just because the beasts are so bright! Also, this is the one story where I dislike every character yet can't stop reading what will happen to them. Only the female characters of this book have any redeeming qualities. The men are just awful scum. Most of them are racist and sexist but what can you expect from the time I suppose! Even the least ignorant character, the researcher, is still someone who can be held in contempt for knowingly endangering the lives of an entire crew without warning any of them.
Posted by The Frog Queen at 6:43 AM