Eye of Newt by Michael Hague 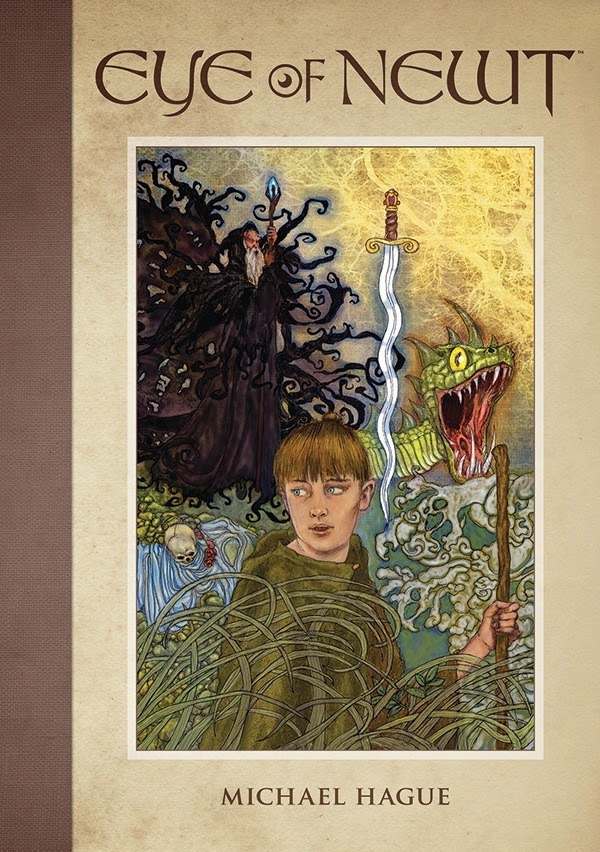 This is the first graphic novel from fantasy artist Michael Hague. Hague has been illustrating childrens' books for decades. His extensive career has seen his work published in over 20 books. Most of them fall under the fairy tale vein while others can be labelled as fantasy. His work is whimsical and has been described as the "classic fantasy style". His media of choice for this comic is watercolor and I couldn't be happier.

This four part mini-series centers around the tasks given to a young sorcerers apprentice named Newt. If the story doesn't interest you, though I say it most definitely should, Newt's surroundings will blow you away. Beautiful dragons and haunting caverns; a forest that will remind you of your childhood illusions. It's not difficult to see the Hague is a master of such imagery. I've been sucked directly back into my childhood. I now have an itch to go re-read all the Peter S. Beagle I own.

On a side note, I'm glad to see that Darkhorse is seeking out such diverse and unique talent once again. It was getting a little sad there for a while. With the loss they suffered in Star Wars I found myself looking at the label and being really perturbed that the only thing I was interested in was the Hellboy and BPRD series. I'm glad their editors are making new efforts. The publication of Eye of Newt was an excellent choice. Get it, just go out and get it NOW!
Posted by The Frog Queen at 4:25 AM