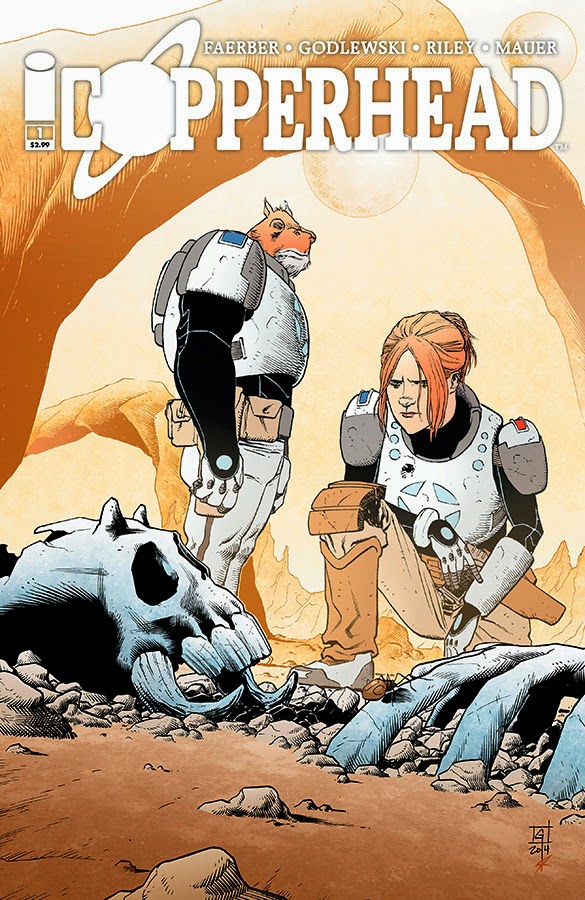 This September Image debut's a new series entitled Copperhead. A sci fi western with a little murder mystery. Brian K Vaughan has already been quoted as saying "Copperhead is the best Image debut of the year and my favorite new comic." Which admittedly, peeked my interest. As a huge fan of Vaughan, I hold his opinion in high esteem along with many others, and rightly so.

I was lucky enough to score an advanced copy of issue 1 and I have to say I fell in love. Single parent Clara takes up residence in Copperhead where she accepted the position as Sheriff booting the first deputy out of the position. Deputy Boo who is a giant alien creature that sort of resembles a marmot. As soon as she arrives however, she's thrown into the midst of a murder mystery.

“Combine Deadwood with Firefly and throw in a whole bunch of aliens, and you've got Copperhead.” -Copperhead writer Jay Faeber

As a first issue, Copperhead has already stolen my attention. I find it refreshing to see a female in a powerful position while not at all being undermined by the other characters because of her gender. Clara is able to handle herself against large and violent alien residence. She voices her opinions without fear and even stands up to her somewhat sulky deputy. In addition I have to applaud colorist Ron Riley. His work throughout the entire issue is fantastic and creates the perfect environment for this space western. The coral colors give the panels a modern feel while fitting this planet perfectly.

To pre-order your copy of Copperhead #1, give diamond code JUL140436 to your local comic book retailer. Please check back tomorrow for my exclusive interview with Copperhead artist Scott Godlewski.