Attack on Titan: No Regrets 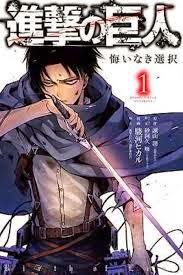 One of my favorite characters of the original Attack on Titan series is Levi. I guess I'm not alone in that because they have decided to give him his own series detailing how he came to be in the survey corps. This book like the other spin off series released last month entitled Before the Fall, is not written by the original creator. It is instead a collaborate project between two people, writer Hikaru Sugura and illustrator Gan Sunaaku.

The artwork, you will notice is very much inspired by the style of the original series however is much more refined and polished. Unlike Before the Fall however, it doesn't give into fan service with the dolly-eyed damsels and presents a lot more personality with each character entrance.

I'd have to say I enjoy this spin-off more so than the prequel however, it lacks the rawness and terror that the original story had due to the fact that there are far less instances of titans. The titans that do appear near the end of the story are not exactly as chilling visually as in the original series. Kinda made me sad.

Knowing me I'll still be picking up the releases in this series but I do hope it progresses with more action and focus on the actual titans.
Posted by The Frog Queen at 2:27 PM