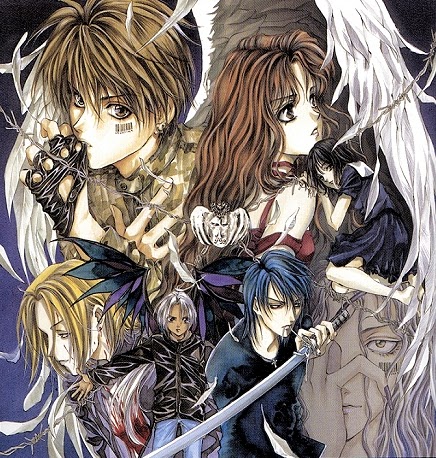 Last night I ran out of Angel Sanctuary books. At least until my Indigo order comes in. This makes me pretty sad because I getting to the bottom of this whole Hell story. Poor little Kurai was tricked into becoming a bride of Hell. Don't worry though, Setsuna goes to rescue her while inhabiting Alexial's body. This of course only makes Kurai more in love with Setsuna so her whole attempt at wiping away her feelings for Setsuna, well it was a complete waste of time.

The development that I found the most interesting over the course of these three books was strangely enough, NOT that Sara Mudo is the reincarnation of an angel, BUT that Arachne is actually Kurai's brother. He's pissed off too. In the end, he saves Kurai and sort of repents his actions of betrayal but it was all a big shock to me. I didn't see Arachne as much of a character other than a support system for Kurai. We also find out that Arachne's only reason for dressing as a woman was to take the identity of the original Arachne who of course was female. Which I think takes all the coolness out of Arachne's character since originally we thought she was a male character attempting to be herself : a woman.

Setsuna and Kurai aren't out of Hell yet and at the end of Volume 10 are left dangling from Alexial's blade which is pierced into a giant (and I mean GIANT) statue. OMG I need the rest of my books!
Posted by The Frog Queen at 4:34 AM