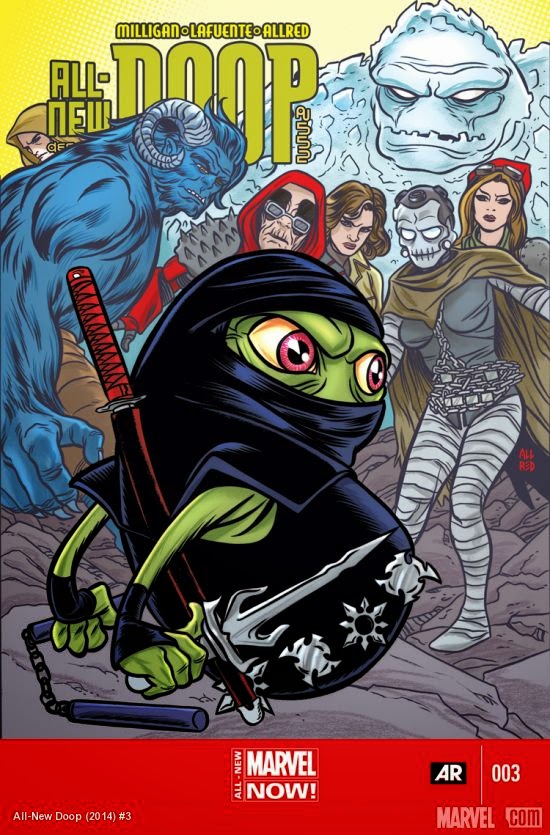 I read these stories because they make me giggle. More-so than Marvel has been able to do in the last couple years. Not to mention, I just love Doop. I always make a point of picking up Doop titles. That, and I really like Peter Milligan's Doop stories. Despite the ridiculousness of the recent Marvel story arc combining the future with the past (and some present in there somewhere), the mini-series is really fun. Especially because we get to meet Doop's mother. Which although difficult to believe, is much uglier than Doop.

So you may remember that Doop proposed to Kitty Pride in the first issue.Well he's still at it and determined to show Kitty that her and Bobby (iceman) are not destined to be together. Which makes me wonder, how does Doop procreate? Not to mention the curiosity I have about how he would attempt to do so with Kitty Pride. Hehehe, I suspect they do some cuddling and then hit the laboratory to whip up a Doop-Kitty DNA cocktail. That sounds pretty gross actually, but DNA splicing happens a lot in the Marvel universe.

This story is about more than Doop attempting to gain Kitty's hand in marriage. Marvel has hinted at the possibility of Doop letting the X-men know the truth about his own origins. While he's at it, he's also going to reveal the truth about this future Kitty Pride, also known as Raze... for some reason...?

I love these covers. Check out ninja Doop! How fricken awesome is that!? That's Mike Allred, I kinda wish he did the artwork for the entire issue...not just the cover. SIGH.
Posted by The Frog Queen at 4:08 AM