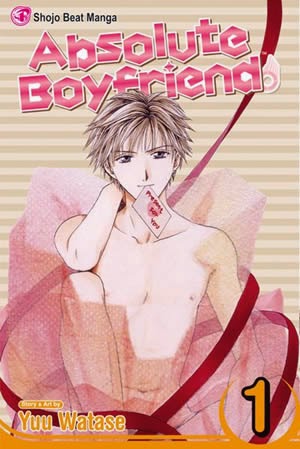 I have a soft spot for Shojo. Yuu Watase is a horrible guilty pleasure for me and yes so is Fushigi Yugi despite the fact that I hate the lead characters and want them to die and rot for all eternity. Absolute Boyfriend appeals to my inner 15 year old. Yes, she still exists. She's the part of me that's not jaded by years of rejection, sexism and shitty relationships (not to mention a few poorly thought out one night stands). My inner 15 year old self is idealistic, flat chested, and romantic just like the main character in this book. She wants to save herself for her first love. Which I suppose I did but I had really bad taste in men and well, let's just leave it at that. I would have so preferred the handsome mail order robot in retrospect. Someone who stands up for you, rather than puts you down because they're insecure about their own sexual performance (and inability to grow facial hair).

In Absolute Boyfriend, a young girl is rejected by her crush at school and eventually signs up online for a 3 day free trial offer. The offer ends up being a robotic boyfriend who in every way is perfect despite the fact that he's a robot. I think my favorite part is that he actually stands up for his girlfriend although it's all a program which kinda makes you feel sad. Until I was older, my boyfriends were people who tore me down, not the kind who built me up. So this component of the robot character is rather important to me personally as I imagine what 15 year old me would want in a boyfriend.

I think the other reason this silly book is so appealing, is because I consider how many stories are written where the main character is male and he gets a female robot. Especially in the anime/manga world. Then there are also things like the Stepford Wives and plenty of stories where robotic women are desirable. Thinking back I can only really recall the male sex-bot in the movie A.I. played by Jude Law. That character along with this character reinforces the stereotype however, that all women want is someone to take them gently. (Well your only a proper lady if you terrified of sex I guess. tch.) The boyfriend says it over and over although apparently there's an option to crank him up a notch LOL.

So you're probably wondering how this story could possibly propel itself forward for additional volumes. Watase does this by forcing our leading lady to help her robot to collect data so that the manufacturers can create better models. In return she gets to keep him and the whole boyfriend experience. Things get complicated when he is enrolls in school. Fun stuff eh? Super-hardcore, cheesy goodness. I feel like saying "like" a lot now. I also have an urge to write notes and pass them under my desk to my coworkers.