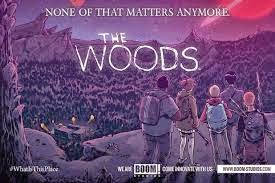 I picked up this issue purely because of the cover. I do that from time to time. The story-line isn't completely my thing. High school students sucked into some strange world. Some glowing pyramid-like device that has launched the school into another dimension. The first issue is where you need to grab your audience and give them a character to hold onto. We met a lot of characters in this first issue. I don't think I could grab onto a single one. i.e. I don't care who dies. I also don't care that there are giant winged bug monster (The Mist anyone?) attacking students and teachers alike.

As far as the artwork goes, it's quite cartoon-y but suits the story. I just wish I could get to know the characters enough to care about whether they make it through this test. My assumption is that this whole dimension of monsters is actually a test on humanity by some crazed aliens, but that remains to be seen. I prefer demons over aliens but I don't think we're heading in the nether world direction.

I want to be overwhelmed by this issue but I'm just not :( Saddness.
Posted by The Frog Queen at 4:56 AM