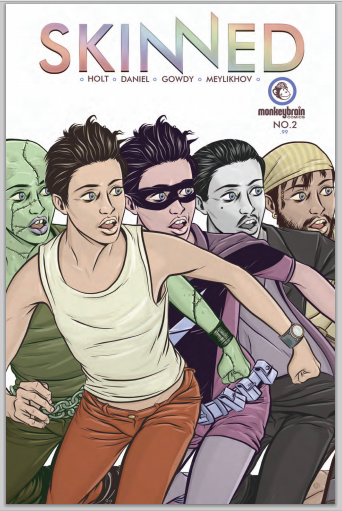 If reality is a curable disease then I wouldn't mind being cured. I wouldn't mind at all having one these Occupy lenses installed. I know that the main characters in Skinned are all about getting back to reality, or rather the organic, but I'm still a big believer in reality being what you make it. I sort of feel as though Aldair (leading female character)is a bit of buzz kill. It's like everyone else is living in acid-trip-fun-world and she expects us to face the boring reality of well... what everyone has been choosing to ignore ever since the invention of Iris.

I should back up. In this world people are fitted with special lenses with which to view the world. This is known as Occupy Lenses and although they alter reality, our heroes obviously haven't lived in 2014 and had to work at MacDonalds. The heroes of this story are a couple of rebellious youth that seek to escape the veil placed on reality by Occupy. There is Buoy, who is a bit of a hacker and Aldair, who's royalty. Normally I take the sides of rebellious youth, but considering my own addiction to escapism (hence all the fantasy & sci fi novels) I find it difficult to relate to these organic reality seekers.

I must say I'm enjoying the cover of issue 2. It reflects what happens when Buoy hacks the system and alters appearances. Although no one turns into a zombie or Frankenstein creature. It would be pretty neat if they did. I'm wondering how far appearances go. As in, if you change your appearance to look like another gender, does that mean you inherit their genitals lol. Think about it. Or would it simply just be the appearance of that. hmmm I still want lenses.