Q & A with Robert Ball on Winters Knight: Day One 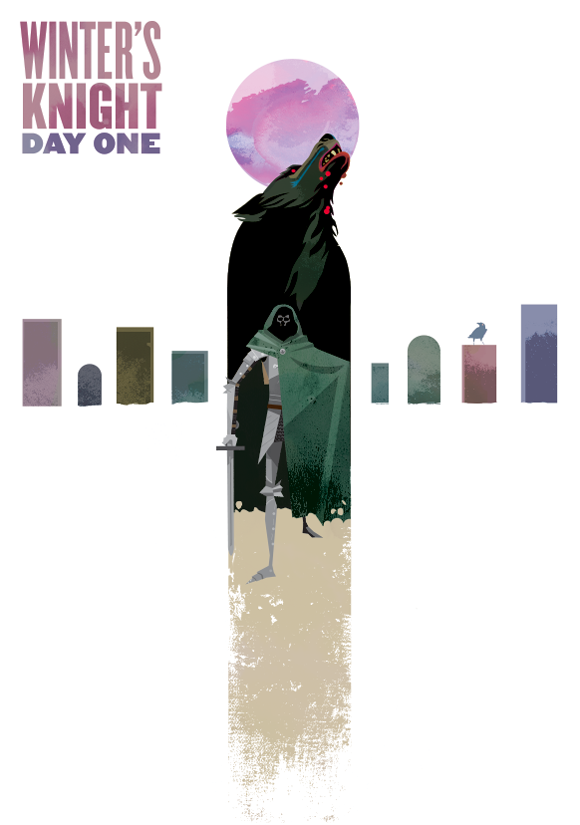 A narrative of computer generated, collage-like illustration. (It took me a while to figure all that out) Ball lets this story roll with violent yet beautiful images of a Knight battling for appears to be his soul. Great Beast Comics describes the plot as "...a wordless tale of an old Knight on a mysterious personal quest through an icy wilderness encountering nightmarish battles with the dark things in the forest and much, much worse. "

To me this personal quest appears to be for his very soul as it is nearly devoured by a giant wolf. Of course, these things are open to interpretation. So I decided to just ask the creator.


FQ:  I was under the impression that our old Knight was cursed and battling for his eternal soul. What was your intended portrayal when you began to illustrate his personal quest?

Robert Ball: Yes absolutely. The impression you should get is of weariness, reluctance to fight and of a penance being served. Why would a knight keep his armour in such extreme circumstances unless it was symbolic - it's a steel plated hair shirt!

The details beyond that are being held back, I strove for mood and pacing rather than narrative and plot (not that you necessarily need sacrifice one for the other)

FQ: You artwork reminds me of collage work. Can you tell me a little bit about your process?

Robert Ball: Me too! I was looking at a lot of imagery from the golden age of advertising illustration at the time (50s 60s) and my background is in graphic design. Guys like Bob Peak, for instance, used whatever techniques they had to get a point across, maybe that seeped in. Also, the knight is angular and stiff and his world reflects that, black and white and inflexible. At the end he has a choice literally in black and white, to kill or be killed.

(by the way, my original ending revealed wolf cubs - the wolf was hunting for her children, trying to survive like the Knight but it was too bloody bleak!)

FQ: When you began Winter's Knight, had you considered an extended story or do you wish it to remain contained as a one-shot?

Robert Ball: I initially conceived of two characters, and a quest, but thought the reader would need some kind of foregrounding without resorting to flashbacks (too complicated!), so I had to go back and draw that instead. So, in a way, WK is a prequel to the story I started with.

The next chunk is written and ready to be drawn, I'm just struggling to find the time to do it - it's a more complex beast.
Posted by The Frog Queen at 4:08 AM