Ahhhhhh OMG. I had to wait in line at the comic book store just to get this. So annoyed!!! At the time anyway. The line-up wasn't caused by Attack on Titan. It was caused by this fricken Spiderman cover commissioned by local comic store owner Calum. It got in the paper that Spidey was in front of the clock tower.. ugh. The comic book store was over-run with old people buying 10 copies at 7 dollars a pop. You know, to put away in case it's worth something. Which let's face it, it's not going to be. But don't get me started on that. It's just a cash grab for Strange Adventures and I get it. Money's, money. Plus, it's supposedly to celebrate Free Comic Book Day, except the comic isn't free...so...anyway... 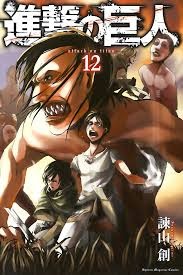 I finally got my copy of Attack on Titan which came out yesterday in stores! Yeay!! So I read it as soon as I got home and into bed. I was kind of sad that it was ALL action. I also didn't find out anything that I didn't already know, suffice it to say some confirmation that Bertolt, Annie, Yamir and Renier are all Titan-humans that apparently were titans first. Undercover titans! Oh and Historia (shitty fucking name) who has been called Krista for ages, is integral to solving the mystery of where the titans came from and like.... who the fuck built the wall and put a bunch of titans in it.

I really enjoy this series despite constantly giving it flack. I still haven't found out if the scripting issue are due to problems with translation or if the author just doesn't know what certain words mean lol.

I was trying to figure out which character I like the best in the series. It's not fucking Eren. That's for certain. I think, that if I had to say I liked anyone, it would be Yamir. So if I was going to cosplay anyone, it would be Yamir. The rest of them... kind weak. Even Mikasa isn't really on my good side. If anything, I'm rooting for the titans to win this thing. That's what happens when I dislike main characters of a story. I just start rooting for the villains. Anywho, sorry this is more a rant than a review but I wasn't in the mood for a series dissection. I felt like rambling. Rabble, rabble.