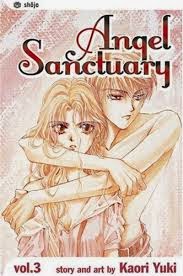 This volume marks a pivotal turn in the story as the inevitable happens, Rosiels' followers attack the one person Setsuna loves most. For those of you who have watched the OVA (which ends at the peek of the story), you know what happens to Sarah. The rest of you will get some news I'm afraid. Let's talk about Sarah for a moment. As a character, she comes off as sweet and innocent. She wants to do what is right but also wants to be true to herself. As characters go, she's what one would expect an angel to be attracted to. The one redeeming quality that Sarah has, to keep a mild favor with me, is that she can be sassy. She also stands up for others and somewhat loyal even to a fault. She forgives people and allows them a second chance without looking like a doormat. This can be noted in the way she reacts to her possessed friend. Despite her friends attacks on her both emotionally and physically, she accepts her friends sincere apology. Of course, her friend wasn't exactly in control of herself, but Sarah is gracious even during when she had no knowledge of her friends possessed state.

I am not a huge fan of Sarah. She's not a major character for me and even for the story, she really is more of a plot device. I do however commend the authors efforts at giving Sarah a personality rather than what normally happens to the damsels of most stories. Sarah did run away with Setsuna against her mothers wishes and knowing that doing so was a sin against god. That action alone gives her some appearance of will and her inner monologue regarding the struggle to make her decision to leave her mother displays a great deal of character.

I don't know much about where the story goes from here. The OVA was not the entire story and consisted only of three episodes. I'm very eager to read the rest of the story. Yes I ordered more volumes. They should be here next week ;)
Posted by The Frog Queen at 6:59 AM