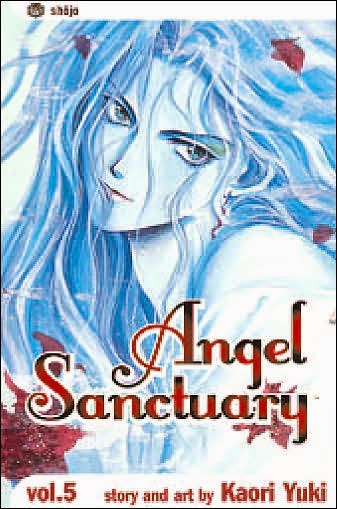 After sifting through some submissions, by the end of the night I tend to pick up whatever manga series I'm plowing through. Right now, that's Angel Sanctuary. I've fallen in love with so many of the characters and currently obsessed with Kato. Imagine my shock and dismay when his soul was obliterated by Doll. Doll is the henchman to protector of the Gates of Hell, Angel Uriel. I was crushed! Luckily he doesn't stay dead for long. Setsuna was able to go into his mind and retrieve him from oblivion. Apparently Kato stored a piece of himself in the large cross-like staff given to Setsuna.

You get to know Kato a lot better in this book. He had a rough childhood littered with emotional and physical abuse. The man he believed to be his father, long resented him because he was an illegitimate child of his mothers previous affair. Kato eventually learns of his origins and begins to understand the twisted mistreatment he endured from his father.

This just may be my favorite volume so far. I promise I won't make out with the panels of Kato. Okay, I'll try not.
Posted by The Frog Queen at 4:33 AM