The Rise of Aurora West by Paul Pope 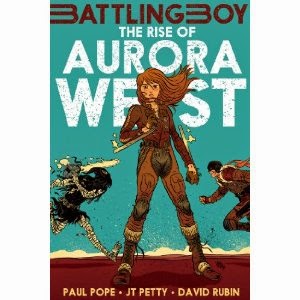 Due to release September 30th of 2014, The Rise of Aurora West is considered a prequel to Paul Pope's Battling Boy. Since first reading Pope's latest book, I have been anticipating a story which included West more devoutly. It was announced soon after the release of Battling Boy, that there would be a spin-off following Aurora's plight.

Back in November, Pope told Bleeding Cool that he intends to have Volume 2 of Battling Boy out around same time of the West release in the following year. Pope also mentioned his intentions of releasing a second Aurora West book. I just can't wait to read the first one!
Posted by The Frog Queen at 6:11 AM