Q&A with JAR and Mira Mortal: SPLIT a Graphic Novella 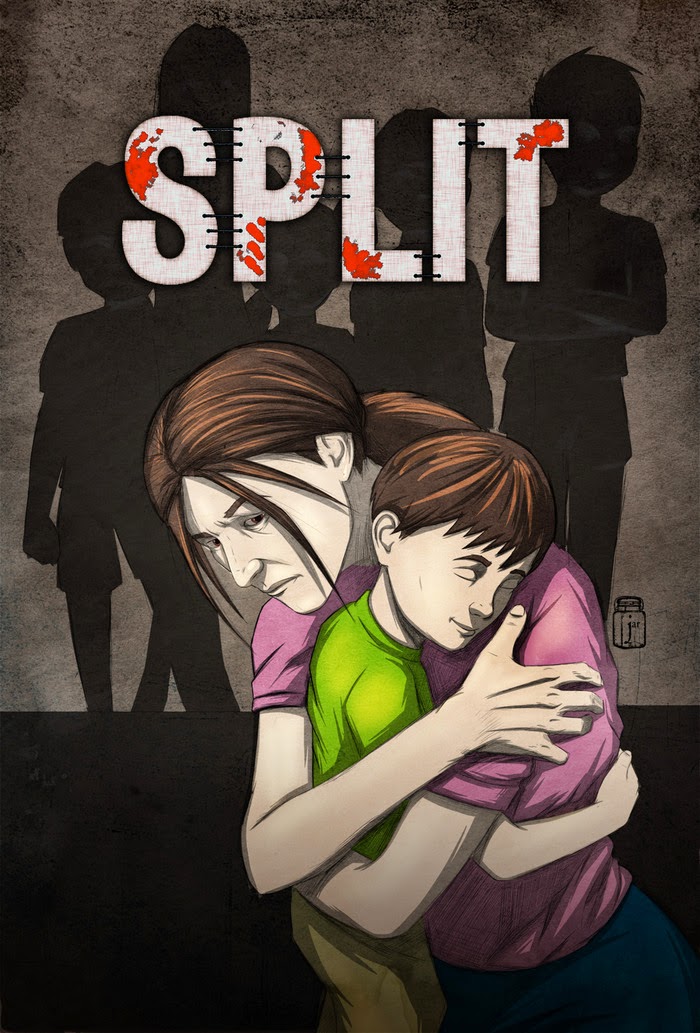 This week I had the privilege to preview a graphic novella entitled SPLIT, a collaborate project by John Rodriguez aka JAR and Mira Mortal. I get a lot of submissions from independent artists and writers. Although I read all submissions I only write about those that I truly feel excited about. SPLIT is JAR's third comic project, clearly a labor of love, filled with so much heart. Once in a while I come across a project like this that makes me dig around, get more info and spread the word. I was lucky to get some questions in with Mira and JAR.

The Frog Queen: Can you give us a brief description of Split?

Mira: SPLIT is about a family that has experienced something so traumatic that they close in on themselves in an attempt to cope. This choice is backfiring, and their isolation is doing much more harm than good. It's a tragedy with a psychological element.
This is not even necessarily the kind of story JAR and I typically tell; we both have varied tastes in comics. At the time we decided to try working together, I asked JAR what he was in the mood to draw, and he said "Something dark." And I said, "I can do dark." SPLIT was just a bunch of notes and thumbnails in a notebook, and I turned it into a script for him in a day and sent it. I'd actually drawn out a few pages myself, but didn't show those to him until recently, I think.

JAR: Mira's description of the story is pretty spot on, so I'll give you some background from my perspective. I enjoy drawing dark stories and imperfect characters. I also enjoy trying to nail an emotion on a drawing, which I think is one of the most difficult things to do. Last year I was trying to find a writer to work with when Mira told me she had an idea. I had read quite a few scripts already that really were not a good fit for me, so I was a bit skeptical at the beginning. When I read it, however, I thought that this was definitely a story I could see myself drawing. The pain the mother is feeling, the happiness of the children for the little things, the annoyance of the older sister, all portray a great variety of emotions that made this book fun, but also very challenging to draw.

The Frog Queen: Split currently has a Kickstarter fund intended to raise money to hire a colorist for the book. Who would make the perfect colorist? What is your vision?

JAR: This is a difficult one for me, since I have yet to work with someone else coloring my art. I also know that the right colorist would make or break the mood of the art. I would say someone like Dave Stewart would be ideal, due to his work on line art by Mike Mignola. We may even try to hire him if we are extremely successful with the Kickstarter! (Though he's probably very busy right now.)

Mira:  Haha! We dream big. The mood for SPLIT is a little surreal, a little dreamy, and a little creepy. Alone in a crowded room kind of feel. For the colorist, we want someone whose skills are already developed, and who is willing and available to deliver relatively soon. We talked about a vision for a painterly style with a muted palette, but definitely getting a colorist with a confident hand is our goal.

The Frog Queen: Do you see Split being a story to carry forward from the original story?

JAR: I see SPLIT as a complete book. Maybe a prequel... but I'd be very hesitant about it. I would let Mira decide on that. We do, however, have a lot of story ideas we plan to work on. Mira will be writing scripts while I wrap up a comic for Action Labs. Hopefully at the end of this year or beginning of 2015 we are working full steam on our next project.

Mira: We've been referring to SPLIT as a graphic novella, and intended it to be presented as a whole short story, readable in one sitting. I think the story is finished as it is, but never say never. There is some backstory that we do not divulge in the book, though. It was more for our own understanding of the part of the arc we wanted to show. Maybe we should put those notes in the book if we get funded, JAR? Amy, what do you think?  :)

JAR:  I think showing the first drawings you did would be WAY cooler.

Mira: Yeah! So they can see why I needed you to get on board.

The Frog Queen: That sounds like an awesome idea actually! I love getting a peak into see artistic process. What are your plans for publication, be it digital and print?

Mira: Whether we get funded or not, this was a learning experience for me, and I found an epic creative partner. It's awesome (and he keeps me really busy). *But* to get SPLIT printed and into people's hands? That would be amazing. Fingers crossed!

For more information and news about Split, please visit http://jarofcomics.com/