From the pages of Sandman came Lucifer, a 75 issue series (along with one mini-series) written by Mike Carey. Recently, Vertigo Comics began releasing the series in a new compendium format of trade paperbacks, the first of which collects the first 13 issues of the series plus the 3-issue mini series The Sandman Presents: Lucifer. The volume also includes a forward written by Gaiman himself along with a new introduction from Carey. 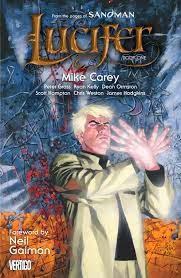 I read the original Sandman series years back and have since wanted to go about reading all the side-stories and spin-offs. I was going to start with Death, but I started with Lucifer given the release of new volumes. I got addicted. I got addicted quickly. There are multiple artists that worked on the Lucifer series during the 75 issue run but the most re-occurring being Peter Gross and Ryan Kelly. With Book 3 only recently released, the entire compendium has yet to be printed. I just ordered book 3 from Indigo last week. Vertigo seems to be doing these larger trade paper compendium collections of many series. I noticed Preacher and Hellblazer both released this way. Unfortunately that means my Hellblazer collection will be a bit wonky. BIG SIGH.

Some jerk at one of the local comic book stores gave me hell last week for picking up Saga and Hellblazer, stating that it was an odd selection. As if I couldn't possibly enjoy both series. *eye roll* I fucking hate most comic book store employees with the exception of a few people at select local stores. Yet most of the time, the employees are complete assholes who are unhelpful and can't keep their shitty opinions on my selections to themselves. As you can see, there's a reason I still order books online and do not shop exclusively at local stores. I love supporting local but not when a) they rarely have the things I want and b) they're completely unaccommodating and rude when you actually attempt to buy something.