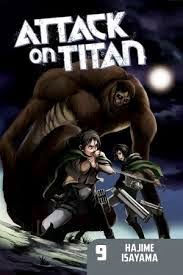 In this volume, the troops attempt to discover the source of a flood of titans who have gained access beyond the wall. In this attempt one of the commanders encounters the Ape-like titan who can speak. We knew about the existence of titans that could speak from the journal that was recovered by the Survey Corps.  The Ape attempts to understand the vertical maneuvering equipment utilized by humans. However in shock, the commander cannot respond to this giant speaking to him.  The ape collects the gear and leaves the commander to suffer the terrifying fate of being eaten alive by giant monsters. As for the rest of the Survey Corps, this volume leaves them helpless in the tower of an abandoned castle as titans rush to gain entry and make a feast of them.

Titans come in all shapes and sizes. Some are shorter than others and some are grotesquely proportionate with large faces and tiny bodies. Giant smiling heads looking contently as they devour helpless humans. Of course the imagery has my love regardless of how crazy it might make me look (muhahaha).
Posted by The Frog Queen at 4:48 AM