Attack on Titan : Before the Fall 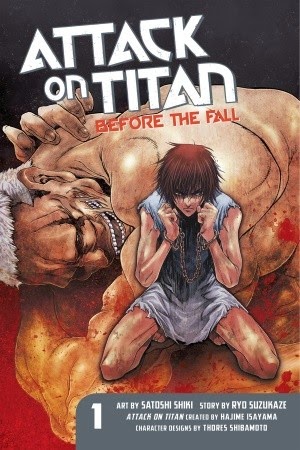 I suppose I got my wish, an Attack on Titan with prolific artwork. Before the Fall has been written and illustrated by two new people. Hajime Isayama is out of the picture. Don't get me wrong, the artwork is perfection. It's beautiful, detailed and each face is full of expression. Yet, the titan doesn't hold the same creep factor as the original books.

I like the story line so far. Remember how I told you that the titans can't full digest their prey? They just spew it all back up, half corroded by stomach acid. So this story is about a pregnant lady who's child survived the ordeal and comes out of his mother's womb alive. Now that back of the book says that Kuklo is cut from his mothers womb after she is spewed forth from the titans belly. That is incorrect. Kuklo was actually found delivered. Not 100% sure how that's possible but no the soldiers that find him, don't cut him out of his mother. This discrepancy could be due to the fact that the trailer released was publicized before the entire story was sorted out. It was not completely accurate either. Maybe the had the cover set in stone before they finished the story as well heh.

The biggest difference is how this story conforms to regular mainstream manga, unlike the original series. The one and only female character thus far, is a young, blond, doe-eyed girl.  She is of course a damsel in distress, waiting to be married off but apparently plans to run away. Yet the idea only occurred to her as this "son of the titan" offers. Maybe it'll turn around but so far not impressed. Maybe there will be a strong female lead? I won't hold my breath. Also, I only saw 1 person get eaten. That's disappointing.
Posted by The Frog Queen at 5:59 AM