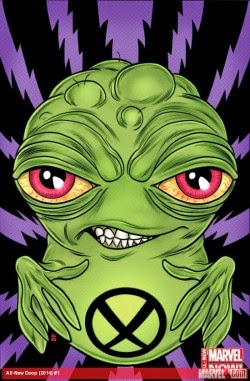 It is fairly rare for me to pick up Marvel. I was once the biggest X-men fan and well, after Nightcrawler was killed off a while back, I just said "that's it". I stopped reading. I have only bothered to look at the odd single here and there after.

However, about ten years ago, Peter Milligan and Darwyn Cooke collaborated on an awesome little story Wolverine Doop. That series led me to purchase Doop #1 today. Admittedly, I am not able to gush over the artwork. Not to the point that I gushed over Cooke's Wolverine Doop, but I do feel that Lafuente's work to be appropriately humorous. It's not really my kind of thing but it suits the mood, especially when you get to the end of the issue.

The All-New Doop plans to be a five part mini-series and  I guess that makes it the first Marvel series I'll been actually reading since Savage Wolverine first started up (and don't get me started on that topic).

If you are like me (annoyed with the ridiculous plots the X-universe has had to face over the last few years) here is a lighthearted take on the current story arc through the eyes of Doop!