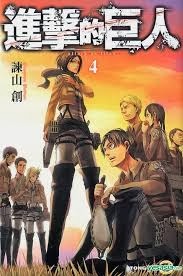 This was not my favorite Attack on Titan volume to date. In fact, I did not start having fun until 10-15 pages towards the end. I found the back story of the characters to be boring. Up until this chapter I found flashbacks to be captivating but this… I put it down several times because of the slow pace. For me to do that with a volume of manga, it’s pretty damn bad.

For the majority of the book, we are in the training corps with the main characters and watching them starve for the most part. I did not find much interest in the personalities of the characters. Mostly I just feel they lack defining characteristics, so much that the author bothers to point out for 3 pages what personality traits each character has! Ineffective writing.

Towards the end of the book, we’re back with Eren who’s just awoke from his coma. It looks as if he’ll get his wish because the Survey Corps shows interest in him and his new Titan Transformation ability.
Posted by The Frog Queen at 10:46 AM

Email ThisBlogThis!Share to TwitterShare to FacebookShare to Pinterest
Labels: Attack on Titan, MANGA