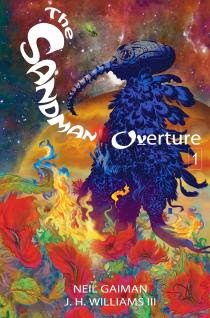 
I was skeptical at first. I just wasn’t sure I wanted to see another Sandman book but I got sucked in by the cover. Then I got sucked in by the fact that it is written by Neil Gaiman. Finally, I was sucked into the artwork inside.  J.H. Williams III has really out-done himself and it’s the perfect mix of whimsy that I always wanted all the Sandman comics to embody. No one will ever beat Sam Kieth’s Sandman for me personally but I can actually enjoy Williams’ version.

The story begins with our dear Dream being thrust into another planet far away. It is implied that he is dead as it was Death who pushed him to this far-away place.. or so she alludes to. Fate cannot foresee what will happen and Dream himself is unaware of this chaos that he is drawn into. It happens just as he was about to un-create a familiar face (or lack of face character) The Corinthian. He who was created to show humanity it’s true face (unfortunately he started eating them). Morphius, aka Dream, has been meaning to un-make The Corinthian for some time now. Yet again, The Corinthian makes a narrow escape as Dream is summoned away for the moment.

With stunning artwork like this, I can't wait to read the next installment although it was rumored to be delayed. I wish all my dreams looked like this book.
Posted by The Frog Queen at 6:24 AM