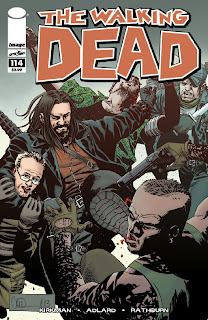 It's great to see Negan take Lucille right in the face. Yup, I just said that. I can't ruin too much the story but there is an unexpected show down. The story as usual is fast paced and as usual Rick's plans come crashing down on him and his colony.

I know I've said before how much I liked Negan as a bad guy but I'm starting to get tired of him. I'm starting to want a new story arc. I want him out of the picture and I watch the colonies argue over superiority. I predict that human behavior will be what ruins these colonies just the same as the last ones but I miss the little exhibitions from earlier in the series. Like the kid that couldn't keep from killing the other kids. Twisted.

The zombies have really becomes even less involved in the story than before. I wouldn't mind seeing Negan get torn apart by a mob of them. We need to get the zombie threat back. I think I liked the story more when they were travelling. I am also a bit disappointed in a shocking lack of deaths and my god, really ?? a tiger?? Is Kirkman really running out of ideas? I have a lot of suspended disbelief, it's not that a tiger is unbelievable, this is a story with zombies. It's just a tiger actually strikes me as a pointless addition to the plot, and kind of out of place. I just don't see what it contributes despite being a sort of attack dog. If the tiger doesn't server a more interesting purpose in the future, I'm going to be quite disappointed.
Posted by The Frog Queen at 4:44 PM